So I got some "Space Marine Command Figures" - Why do I bother with GW figures?

I do not consider myself a Games Workshop 40K wargamer - not at all. The toys I have amassed over the years (decades) are bought purely out of the Sci-Fi feel good factor - spawned I think from the sculpts and art work rather than belief in their universe (Note: GW have still done very well out of me). No I am not a 40K gamer per se, I do not possess the complete 40K Orc hide-bound rule tome for one thing. I do not posses any complete "army". I have a basic knowledge of the 'sequence of play' from a starter/primer magazine used to lure people in but I am sure I would be torn apart in a "competitive shop game". Over the years I have acquired various "now out of date" Codex's from second hand shops or bought some new (Tau, Necrons and Tyranids - now out of date) to assist painting and modelling, but artwork first or a cheap bargain is my motto. All this is not going to stop me from buying some Space Marine Command characters (old school, not Primus) .. because I see a use for them in an expanded Space Crusade system (see below, I class these as "character painting projects"): 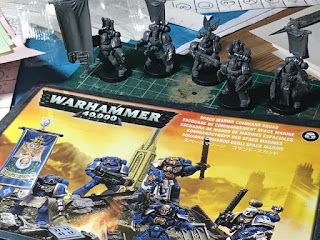 My children, well my eldest son for now, have inherited my Sci-Fi and fantasy troops as I was running out of space in the loft so they surreptitiously "moved into a downstairs bedroom" (I should really call it a tactical loan). I have never fought a Warhammer 40K with my "own" troops but have enjoyed an intro squad game at a shop (they were very complementary about my Tyranids). The one club game I once played was with other peoples toys (Orcs [me] versus Chaos Space Marines) and frankly was a terrible experience, as I was one half of a historical gamer pairing trying to understand the system, thankfully some "grown-up" (middle-aged) teenagers came over to help and salvaged something. I didn't even get to do a proper "Waagh" ;)
My hope is to recycle these troops 'character' into exploring "The Black Fortresses" (modern versions of the Space Hulks to my mind) akin to move-style horror RPG. I'll mix in other ranges. So although for 90-95% time I enjoy ignoring GW, I still like that they are there - particularly as I will freely borrow from their paint ranges and techniques.
Posted by Geordie an Exiled FoG at 07:00