The Matilda I's slow tortuous escape from the direct fire of the 105mm Howitzers firing over open sights continues, but inevitably it means more casualties of precious tanks that the British Army (or rather BEF) can ill afford to lose at this juncture. The two companies of Matilda I's swing to right of the contested village - as the Brit would see it], the one company of heavier Matilda II's swinging to the left [as the Brit would see it]. The Matilda I's have already suffered 50% casualties but the Matilda II's are as of yet fresh and untouched (see below, the DLI infantry are content to be out of sight from the German artillery,but a watchful eye to the sky reveals another [potentially more deadly] danger, circling like a flock of vultures, a visitor from the Luftwaffe a flight of Stukas, eyeing up the tantalising sight of a nice line of enemy troops sill in trucks): 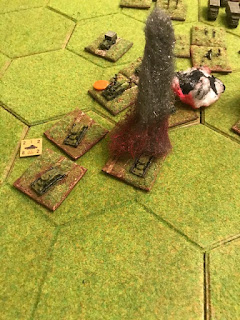 The mournful wail of the sirens from the Stuka's precedes a devastating bombardment that "incredibly" (only) pins a company of the 8th DLI and does not destroy them - however they are "frozen in their situation" aka "perilous". Meanwhile the armoured tip of the British Right Hand Column, although dispersed and diluted, has swung into the "soft" head of the Totenkoft Motorised Infantry Battalion it has already savaged. Two troops of Bren Carriers and two troops of Matilda Is conduct an armoured assault - though lacking friendly infantry back-up (see below, the British force is being pulled out of mutually supporting formation and is being dispersed across a widening battlefield): 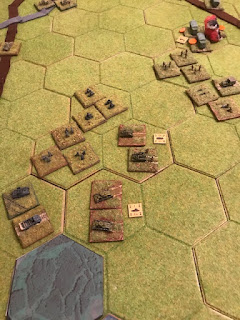 One positive development for the British is the positioning of the British Royal Artillery detachments FOO, clearly seeing the enemy firing over open sights. He promptly call ups a bit of counter battery fire with devastating effect. One battery of German 105mm is annihilated and another routed, effectively a Battalion of firepower so that is another 2VPs for the Allies (see below, although well ahead of the VP (4-0 [2 x 1VP Hex + 1 x 2VP support battalion]) front the Allied player is extremely concerned about recent developments): 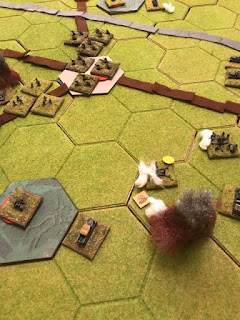 The Matilda Is attack routs a motorised German Infantry Company but loses another Matilda I to a Panzer Jaeger I troop which is sufficient to crack (or rather check) the British morale (see below, another colourful spot of flame lights up the battlefield): 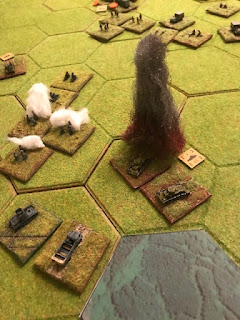 The Bren Carriers attack is again spectacular as this time a whole company of German motorcyclists are 'put to the sword' effectively ending this German battalion as an effective fighting force (see below, and earning the Allies another VP in the process making it 5-0 to them): 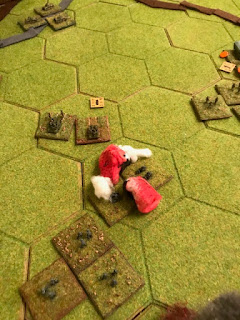 The British Commander although taken aback at the Matilda I's rough treatment of is extremely aggressive in nature (he must have read Rommel's book)  and decides to launch a combined armour/infantry assault to break through the line of German infantry to the left of the village [as the Brits would see it]. He certainly is taking the fight to the Germans and causing them much concern  (see below, the Matilda II is also a much stronger faster and better armed tank than the Matilda I): 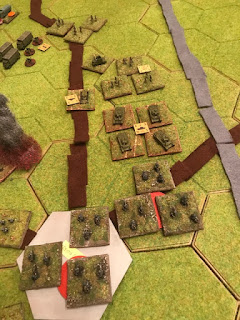 The "Hell on Earth" consumed the column of tanks, as to their left a Battalion of SS Totenkoft heavy artillery opened up from concealed flanking positions. They had moved up and de-bussed during the course of the initial exchange with the companies of Matilda I and under cover of the Stuka attack. The flanking position improved their odds against the Matilda II's heavy armour and just when the Germans needed it they received "good dice" (see below, three out of four Matilda II troops went up in flames and effectively brought the British attack to a sudden stop): 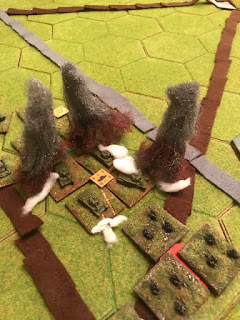 With that came the first German VPs, two for destroying the 7th RTR as an effective fighting force (Germans 2 VP, Allies 5 VP).
Posted by Geordie an Exiled FoG at 07:00