Some more 'seemingly' random USN cruisers - which almost finishes off my early war US naval fleet. There is a purpose behind this motley (but much loved) collection as it allows the naval order of battles for USN at Guadalcanal to be marked as complete (see below, nine ships, three more Atlanta's [San Diego, Juneau, San Juan], a Brooklyn and the Iron Bottom Sound trio of USS Chicago, USS Quincy and USS San Francisco - also the really early war USS Houston and USS Marblehead): 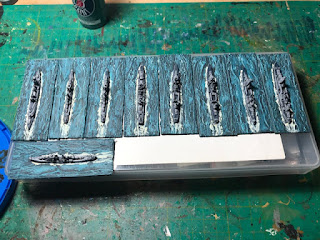 OK with this lot complete it should be across to the IJN (although I do have three remaining pre-war heavy cruisers to paint up and there is the small question of US Battleships which [barring the USS Washington and USS South Dakota I have already painted up] will be needed for the later Pacific War battles) starting with the Coral Sea, to Guadalcanal and then to the (huge) Midway "Invasion Force"!
Posted by Geordie an Exiled FoG at 02:12