The Orc War Boss raged as the Orcling's Dakka Dakka Jet's blip disappeared from the crude radar apparatus. He turned and pointed to the three surely looking young Orcs. "Waaagh". The Orcs understood their leader's order. The Dakka Dakka Jets took off in unison hell bent on revenge. Soon enough they had their chance (see below, three Orc Dakka Dakka Jets tangle with a pair of Imperial Navy Thunderbolts - winner takes all): 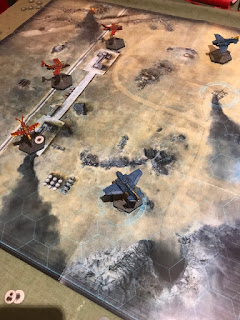 The speed of the Orc Dakka Dakka Jet has to be respected but it first must be controlled and all three Orcs are guilty of overshooting their original marks (see below, the temptation of running up to speed 8 was just too much for these young hot-heads, dangerous as the Navy pilots had a height advantage and have planes that can turn): 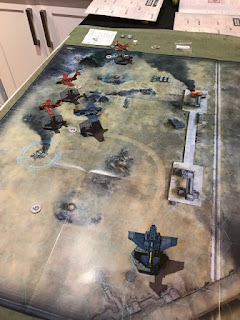 The battle suddenly became a twisting turning fight that teh Navy pilots liked, with two Dakka Dakka Jets again over shooting but remaining safe while the third lay in the cross hairs of "both" Navy Thunderbolts - this little Orc surely was fried chicken! (see below, despite being in the optimum "middle range/killing zone" of both auto-cannon (6 dice) and lasers (2 dice) [rolled for twice], the Navy pilots missed a sitting duck [perhaps putting each other off] - something they could well live to regret latter, be sure to take your chances quickly when they come in Aeronautica Imperialis): 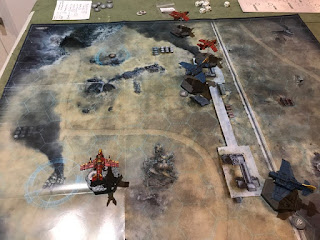 The Navy pilots then faced a nightmare of their own creation, two Orc Dakka Dakka Jets up 'close and personal' in the Orc Dakka Dakka Jet "close-in killing zone" each wielding a hefty load of firepower (8 dice) and with the Orcs holding the initiative, at least one Orc jet would get to "fire first". Perhaps it was inexperience (or just plain bad dice rolls) but the young Orc muffed his chance and only inflicted a inconsequential amount (one hit) of damage to the sturdy Thunderbolt's frame (see below, the bottom Orc jet misses his chance [badly]): 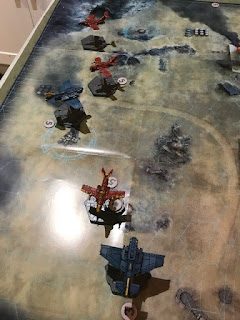 With the immediate threat to himself gone the Navy pilot coolly decides to "take out" the medium range Orc Dakka Dakka Jet lining up on his partner and the result is one young Orc dies in an incandescent ball of flame, not ever "seeing" his killer, his eyes being fixed upon his opponent directly to his front (see below, first blood to the Navy, 1-0): 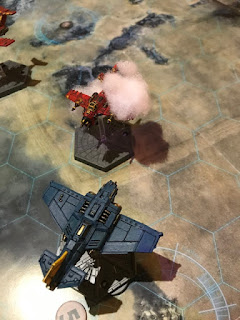 The fast paced action continues, spinning into a dizzying frenzy of raw speed and crafty turns. The lower Thunderbolt twists and jinxed onto his opponent's tail while the upper Thunderbolt cleverly anticipates the third Orc pilots "stall turn" and gently "swoops" in from the side lining up a medium ranged shot (aka the Thunderbolt's armament "sweet spot"). The Orc pilot is first blinded and then deafened by both the eye-piercing laser and crashing sound of the auto-cannon's shells, before an explosion hurtles him into oblivion (see below, "Fly Navy" 2-0, things are not looking good for the last Orc): 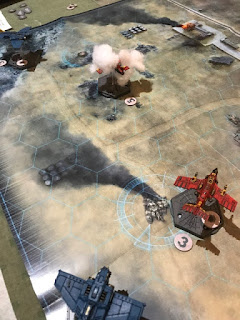 Being tailed is possibly last thing you will ever do! Strike three to the Imperial Navy as the Orc, although not in the Thunderbolt's "sweet spot" takes the "tailing fire" before it can move. A good hit means a dead Orc (see below, the young Orcs knows his mistake, but sadly not live to tell learn from his mistake and "tell the tale", 3-0 to the Navy, 4-0 in the campaign - but there is a seemingly endless supply of Orcs ready to join the fray): 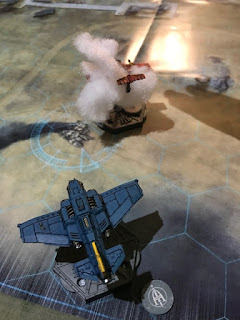 The Orc War Boss orders reinforcements and plans to lead the next mission himself (see below, the next painting project is the Orc Dakka Dakka Fighta Bomma - with a turret at the back that could come in useful given the twisty turning capabilities of the Navy Thunderbolt fighters): 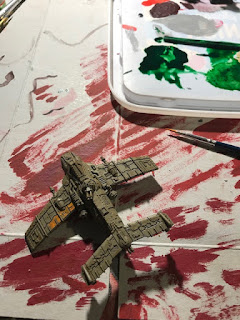 Conclusion: The air war continues unabated on Drakon-514. The Imperial Navy holds a slight tactical advantage. Who will win? Only time will tell, I see only a winter of sky combats over Drakon-514.
Posted by Geordie an Exiled FoG at 11:28