It was bought, but yet to be played. Then it was played and really enjoyed (see below, the game I saw Chandler play in The Big Bang Theory and knew, just knew I had to play. Also note, the nearby "Nurgles" were an unrelated simultaneous painting project): 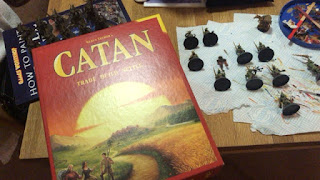 Not only was it played, it was played over three generations. My son, his father (me) and the grand mother! It was enjoyed by all and .. even better .. there are expansions!
Five stars rating .. even though my son beat me!
Posted by Geordie an Exiled FoG at 23:33

No game is complete without swearing at the "Fooking Robber"

I must have missed The Big Bang Theory episode with Chandler in.

It was more of a background reference and "in the background to a scene" rather than the focus as per the full blown D&D session .. then again it could be a case of "false memory syndrome"!