The Minotaur is an iconic monster and one I never had as a kid, but it was always on the "bucket list" of D&D monsters to get. Lock-down and internet browsing lets certain things happen and while "purchasing" a WW2 28mm German infantry gun (more about that in another post) from Black Tree Design something dropped into the Cart and once in I just could not figure how to remove it (see below, I think they called it a Minotaur Champion but it looks like how any Minotaur should look to me - based up on Milliput to avoid it embarrassingly falling over): 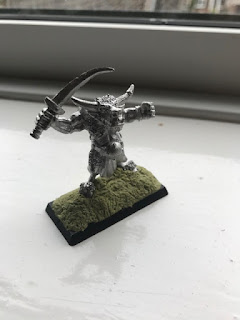 The base texturing came from my son's hobby tip courtesy of the Critical Roll podcasts - crumple up some tin foil into a small ball and roll it over the still pliable Milliput. He took pity on his farther cursing his old school efforts with an old toothbrush. Airfix Acrylic primer under coat was added (see below, ready for the painting tray to begin proper - really impressed with this sculpt): 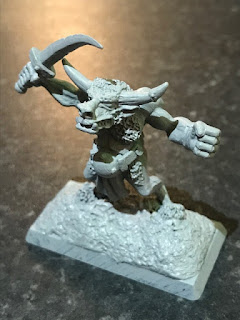 Note: This one might be a race against time to get this one ready for his (or its) campaign debut! Just saying to any PCs casually reading this blog post ;)
Posted by Geordie an Exiled FoG at 12:02

I might just need to get another one with an axe ;)