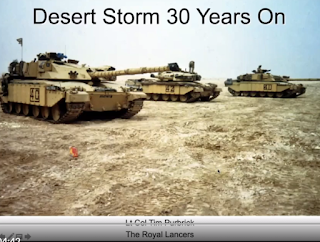 This one is a "must watch" series. Something that will certainly help fill in the remaining time of "lock-down" with :)

https://www.youtube.com/channel/UC1Co6erNgczMX9UVWGbNQ2g
Posted by Geordie an Exiled FoG at 07:00 No comments:

Note to Self: Found a Good New (well to me) Wargamming Blog

https://20thcenturywargaming.wordpress.com/
Posted by Geordie an Exiled FoG at 11:53 6 comments:

Bookmark this or whatever, just remember where this is - these wargaming talks are brilliant!

The last four talks in particular were spectacular:

Why and how games work so well in educational settings! (Jared Fishman) Brilliant! I just wish I was a student in a class like that, in a school that taught like that .. heck to be on the faculty teaching this way would be a dream job! Serious envy! 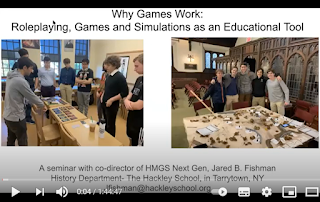 War Plan Orange (Peter Pellegrino) - Myth Busting the NWC in the development of War Plan but emphasizing the cadre of naval commanders it created via its intensive wargaming teaching methods (that lead to the eventual victory over Japan): 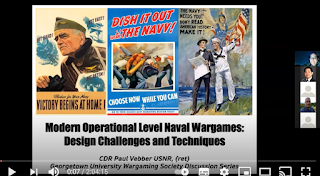 The Battle of France 1940 (Peter Perla) - this campaign hold so much interest for me, in particular the first tank battle at the Gembloux Gap: 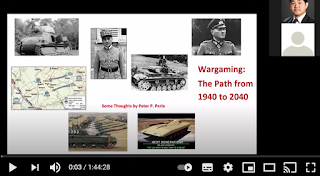 And there are many more great talks in the pipeline!

Zoom Version of Hydaspes 326 BC

Normally I associate wargaming with actively moving toy soldiers around a board, measuring up angles, rolling dice and then despairing looking at the CRT when the "plans of mice and men" go awry. In this new pandemic environment, by being made to do things at a distance, for example via Zoom, changes all that. More often than not, planning becomes the paramount and a major part of the enjoyment, as you become in many ways a spectator to the main event. Especially when trying to fit the game all into a neatly allotted precious time-slot which means keeping it simple for the umpire. Small boards but still great fun.

The Alexandrian battle of Hydaspes against the Indian King Porus has been on my "to do" list for ages so I jumped at the chance when the Sheffield crew put is on. My job was as the Indian cavalry and chariot commander was to remove the Alexandrian cavalry from the equation, quite a tall order when you know they have Alexander! Note: Not being there, also limits artistic license in taking pretty photos so instead I tried to capture proceeding via "sketch maps" (see below photographs below):

"Phase I" the opening moves of the battle, send forth the elephants of war! :- The Indian elephants charge forward intent on wrecking the Alexandrian Phalanxes and their neatly ordered and echelon battle line, Alexander however counters with his cavalry and light troops and the Indians counter his counter with their cavalry, getting confused? I was! (see below, the elephants are knowingly sent on a one-way mission) 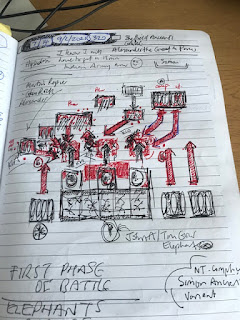 "Phase II" Elephants gone, send forth the arrow storm to darken the skies" :- Dead elephants litter the battlefield, causing mayhem even in their dying moments, with one one the Alexandrian Phalanxes a little bit bent after meeting one. Plan A thwarted, Plan B in Porus' mighty tactical encyclopedia was consulted, that being to let forth a volley of mass destruction upon the still menacingly approaching Phalanxes (see below, to the left and right flank the cavalry battles has descended into a swirling melee, which looked to be going the Indian way. I think Alexander was now hoping the Phalanxes would do the job in the center): 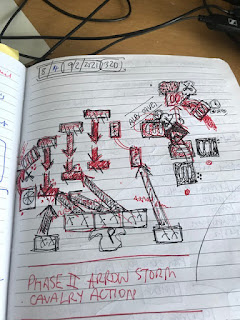 Courtesy of the umpire an aerial view at the Hydaspes at the "in the balance" midway point (see below, there is at least some form of a rough correlation from sketch map to actual tabletop, albeit the distances distorted slightly - the elephants are long gone now!): 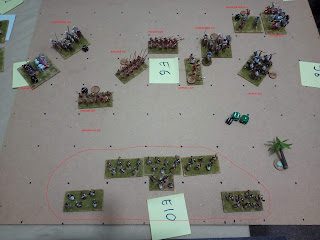 "Phase III" Cavalry kill cavalry and the Phalangites go in :- Sometimes the main bodies of infantry 'never go in' in wargames, things being settled by the action on the flanks. Respect must therefore be heaped upon Alexander's Phalanxes for 'going in' - despite the elephants best efforts and despite the arrow swarm (that kept falling from the skies until the very last moment). Depleted Phalanxes versus Indian sword wielding bowmen (see below, I think it was safe to say that the cavalry were very much 'keeping up appearances' on the flanks, waiting to see the result of the infantry battle): 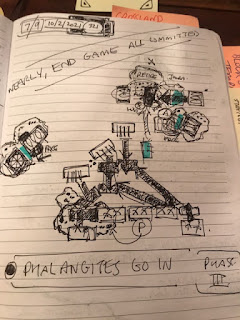 "Phase IV" Brutally contested close combat and the Phalanxes "break" :- The echelon of Phalanxes hit the massed Indian bowmen. After an initial success on the Indian left(Alexandrian right), the depleted phalangites of the middle and Indian right (Alexandrian left) give way. Elephants, arrows and now huge Indian broadswords - is all too much for the homesick Macedonians. Alexander cannot help, he is locked up in the cavalry battle still, the Companions are not having it all their own way at all today. Worse still for Alexander, Porus is at the right spot and at the right time to tip things subtly in the Indian way. The two center and Alexandrian left Phalanxes now break, all is lost, despair and fear grip the Alexandrian Army. The Indians are buoyed by their success. Alexander decides enough is enough and withdraws what he can, badly beaten but still alive. A long march 'home' to Babylon awaits him, history is rewritten, albeit the last chapter of his still successful career. 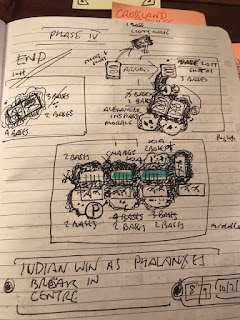 A great game and lovely painted soldiers, the Zoom pictures didn't do the 20mm HaT (Macedonians) miniatures justice (I think the Indians were 20mm metal [Newline?]) but here is a view of the Indian 'nicely painted' forces sent by Simon the umpire (see below, "blue" seems to be their "good luck" colour): 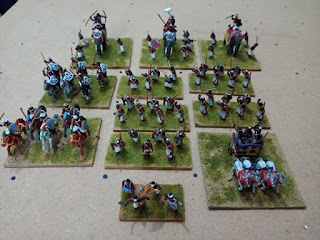 The rules used were a variant of Neil Thomas' Ancients rules (Note: Not the One Hour Wargame ones). As for the 'battle sketches', an interesting way of depicting the battle without fiddling about for Zoom screenshots? Yes, but is it Art? More importantly is it not time for me to paint up my Xyston 15mm Alexandrian Army that is languishing around in a box in the attic and then get myself a 15mm Indian army?
Posted by Geordie an Exiled FoG at 17:27 8 comments:

Mea culpa: In my haste to list the VCOW2021 games I participated in, I made the dreadful oversight of not mentioning Jim Roche's fantastic sing-a-long session where he presented a historical look back at pandemic's through the ages .. accompanied to appropriate music of the ages. I had not previously been to one of Jim's session's at CoW but will be front row for all future sessions! 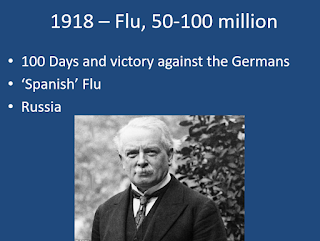 Music can capture the meaning of an event as equally as wargame can simulate the gunfire, here is a couple of versions of Bruce Springstein (studio and live) singing Mrs McGrady to see what I mean:

Posted by Geordie an Exiled FoG at 14:59 No comments:

Firstly and foremost, when others say it better then you,  point the way first to them.
Please read the following blogs for their informative entries (I have and I was there, but still leaned tons of stuff):
And doubtless there will be more to come from other authors in the Blog Sphere. I have to say that VCoW was (again) such an incredible experience, hats off to the Wargames Development (WD) committee for organising it, respect - such respect in fact. The down side to such an event being that it leaves a huge "weekend sized" hole in your life that you have to fill and play catch-up afterwards. It took me literally a week to have time even just "to collect my thoughts" with the rest of the real-world going on. My own contribution to VCoW 2021 was "Politics by Means of Pointy Sticks", a Peloponnesian excursion into the descent into the madness of this ancient extended civil war (see below, war by proxy, an ally of Athens fights an ally of Sparta .. 15mm hoplites in a clash of bronze!): 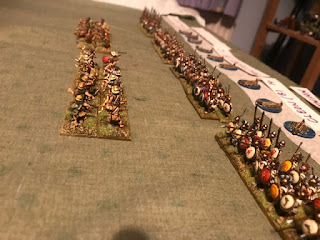 I have also vowed myself to give time and respect to the Nugget and write some articles while the "memory" is still fresh. These memories being:
Happy days .. no wonder I was exhausted. More reporting of the above as I write-up those Nugget articles. Again credit to all, as there was so much other stuff going on I so wanted to see in the parallel streams and I have not even touched upon the content of the truly excellent talks given. I did miss the face-to-face banter (and food) of CoW but hopefully in the not too distant future that can be addressed! Till then, let's "Keep on Zooming" on! Great see you all, with the traditional "sea of hats" send-off!
Posted by Geordie an Exiled FoG at 13:07 2 comments: