Quite possibly my most favourite pair of books of all time in the world (see below, these two books make sense from a software development, project management sense and life adventure sense - but also describe evolution of adaptive complex system behaviour - if that seems too academic or vague replace it with "it just makes s**t happen quickly without the bull!"): 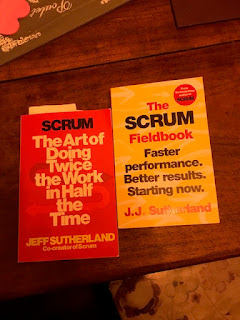 As always I listened to the Audible versions first, then just had to get myself a paper copy in both cases - "to flip through", as one has the want to do!
Posted by Geordie an Exiled FoG at 17:34 No comments:

RAND's Jasons predicted this back in the 1970's and it looks like they were right!

Every early war German infantry platoon needs to be confident in having an effective anti-tank capacity to stop enemy armour. Naturally the Pak 37mm AT gun is perfect for the job of stopping German Armour (Marks I to IV) but please don't ask it to worry a Matilda, Char B1 Bis or T-34 (see below, an optimistic German PAK crew pose for a Signal photograph): 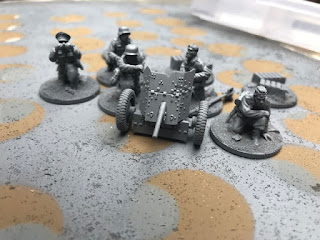 Crew  (bodies) and gun from Rubicon, but the crew heads are Warlord Germans head-swaps in- which look far better than the smaller Rubicon originals!
Posted by Geordie an Exiled FoG at 07:00 4 comments:

Dilemma. Well I have the basic Russian platoon  formation in Warlord Game figures for (early war to at least 1943) Russians [Stalingrad and the basic Chain of Command OoB] but I was left with a sprue of eight men. I had to urge to "clear the Russian project shelf" so rather than make some 'basic rifles' I wondered what to do with them. In the end I went for the following mix - an observing prone "officer type" with binoculars, two LMG teams [as the latter part of the Stalingrad campaign seemed to be pushing them into OoBs] and three SMG's - two of which were "Tank Hunters" with a short life expectancy (see below, my last Soviet raw plastic ready for the 'paint shop'): 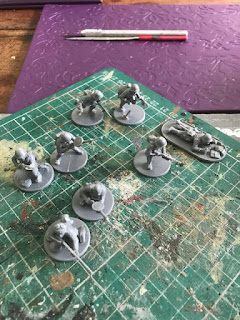 The same but posed for Pravda camera shot (see below, "Defenders of Stalingrad drive the Fascists Back into the Volga") : 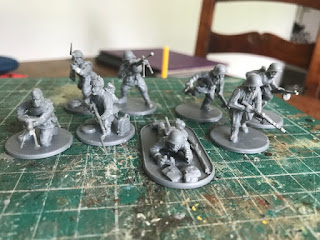 AI in the news again (for all the wrong reasons) Facebook

BBC News tells the sorry tale of Facebook following on in the faux pas footsteps of Google, Microsoft and others:

Test of Honour: In the Works (WIP)

Ha! I am finally getting round to putting together my "First Edition" Test of Honour figures together (bearing in mind the game system has already moved onto the second edition that tells you how late I am on this). The samurai and commoners were an interesting multi-part build (ahem, understatement) and let it be said that I appreciated the fact that only twelve figures were needed for the first scenario (see below, now primed and washed): 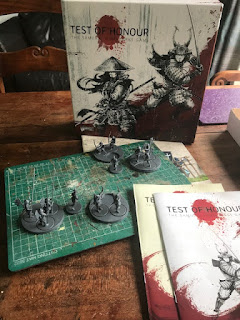 I am sketchy on the clans, but suffice it to say I will keep to the box art and there will be a Blue Team and a Red Team.
The new 'owners'(?), as in post Warlord Games era, seem to have put significant energy into developing it further. I note there is a 'first edition to second edition conversion pack' (looks like the 'cards have changed').
https://testofhonour.com/
I will play the first six first edition scenarios and see if the inkling takes me any further.
Posted by Geordie an Exiled FoG at 07:00 2 comments: 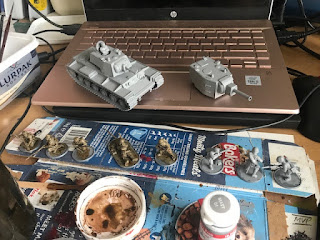 They have at least received their primer and mandatory Vallejo dipping in dirty Brown Wash (see below, pre weathered before the first true lick of camo paint arrives): 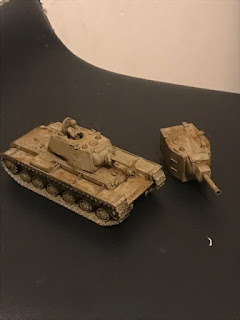 The arms folded posture of the driver is probably because he has just been told he is destined for the streets of Stalingrad in a Chain of Command campaign!
Posted by Geordie an Exiled FoG at 07:00 2 comments: