Topside done, the Lysander needs a shiny silver highlight to its Games Workshop Boltgun Metal underside. Nice and shiny in contrast to the other RAF 1940 half black, half blue undersides. 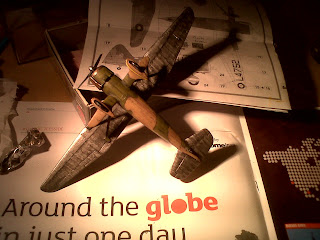 Then time to make the engine cowling have a bronze tinge to it. Pretty much there now painting wise, just a touch up and trim post-decals. All the time I spent on my RAF blue crew uniforms seemed to have been a tad wasted when seen from a wargaming distance :( Next: The decals beckon (always my least favourite part but essential on a plane)  I hope they don't disintegrate on me again! To be fair Airfix have always sent me replacements when they do.
Posted by Geordie an Exiled FoG at 18:00 3 comments: Links to this post

I made a special effort and while the "adults" were watching trashy TV, silently I arranged the living room table as per my defunct painting table (as best I could). The Lysander project (aka the 1940 BEF Army liaison/cooperation plane) was revived. I had last left the Lysander painted in base colours to which I added a mid tone and highlight to the greens and browns (see below). 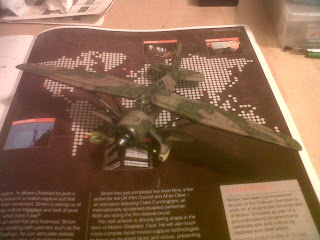 And so, so very therapeutic this all was. I stood back looking down from above seeing her sitting in a brown field somewhere in France 1940 (see below). 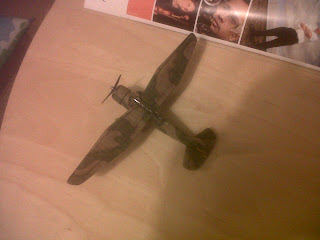 I opted for the crazy Army Co-operation squadron version (No.4 Squadron, RAF Odiham, UK, 1939), a "shoot me down" death-wish operational remit if ever there was one, flying low and slow over a battlefield dominated by the Luftwaffe in 1940. Hopefully not many of them were deployed to France before disaster struck. 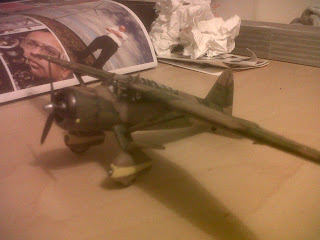 I do like the crazy stupid yellow stripes on her landing gear, which makes a bit of a mockery of her nice camouflage pattern. Perhaps NZ Paul and Al could have used her over Calais 1940, I think twenty of these were used to fly a one-way supply mission in, during the last desperate days.

All the time I was watched by "Wish" the latest addition to the family, a "stray cat" which has adopted us and looks set to stay (see below). 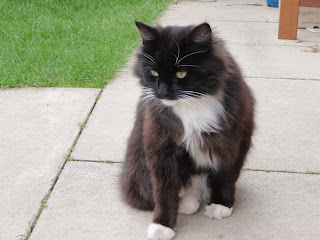 To do: A highlight of silver on the undersides, then it will be ready for decals and a varnish
Posted by Geordie an Exiled FoG at 23:15 7 comments: Links to this post

Jacques takes to the air: Wings of War

It came as a bit of much needed light relief to just pop into the "club" and take to the air in a fabulous French flying machine for a one-off night of Wings of War, a WWI dogfighting game of minimal fuss and maximum fun. I unwrapped the cards for my whimsical Nieuport 17 (the only one of my collection I had not yet tested in combat), flying solo rather than as part of a Escadrille "Jacques" searched for the Hun. The game was well underway so I just joined in by setting up in a what I thought was a patch of clear blue sky and tried to remember how to "fly" again (see below). 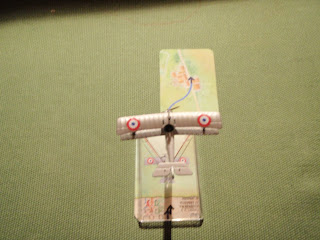 No sooner was I airborne than a buzzing sensation around my eardrum meant that the Boche had found me. A stubby little Pfalz III with "grinning devil" pilot was gunning for me. I ducked and weaved but the "Hun from the Sun" had me dead in his sights. Drawing the requisite damage cards first one for his long range pop, then two more for his shorter range pop (with the dreadful salad dressing  of +1 additional damage for a successful follow on shot) I wondered if it was going to be my shortest ever game (see below for the German's perspective, how could he surely miss?). 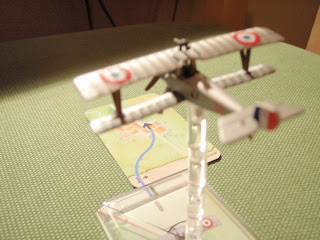 But behold, I had the luck of the devil himself as all three cards were zero damage and even better a strange symbol meant the "grinning devil's" guns had jammed! My name was now "Lucky Jacques". With fists clenched in rage (lyric nicked from American Pie) the Hun swerved away as a friendly RFC SE5a swooned in after him. Laughing like a madman, I turned and nearly crashed into a Sqad flown by "Hat in the Ring" Rickenbacker (US) himself. With friends like that who needs the Hun? Nearing the "edge of the world" I practised an immaculate Imelman which meant that I had an unexpected head-on with a equally astonished German flying "something white with stripes". What the alarmed German saw of me is shown below. 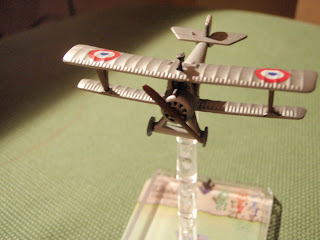 It all became a bit of a blur as the short-range exchange gave me a new central parting and an aeroplane full of holes that could not turn right for three turns. I saw holes appear in his fabric, but he flew on. Off in the distance there was a bright ball of flames denoting the demise of the Pfalz III at the hands of the rampaging SE5a. As I finally righted my crippled plane I saw with some satisfaction my "something white with stripes" nemesis disintegrate at the hands of that unstoppable SE5a (again, I think that was number three for the night). For me it was time to go home as I had less than half a plane left, I was badly in need of a glass or red wine and the satin sheets of a "feme fatale" .. ""vive la France".
Posted by Geordie an Exiled FoG at 00:03 10 comments: Links to this post

Here's one for Al a close up of a British Cromwell (remember this is 1/300 scale). It's trying to suppress German infantry in a built up area with its main armament. It may as well be playing Vera Lynn records. Still a nice little model with very effective subtle white highlighting (Yogi's collection). The owner of the model was so unimpressed with my original feeble attempt (see bottom) that he kindly provided me with a 7th Armoured publicity shot: 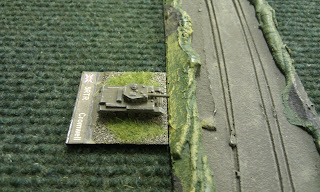 I am sure you will agree much better than my original effort (below). 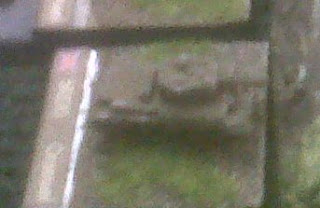 Note: It took me a surprisingly look time for this computer bod to work how to do this! Not the best as I can see a much clearer image zoomed in on my BlackBerry. I will have to do some more experimentation or go back to school :)
Posted by Geordie an Exiled FoG at 23:44 5 comments: Links to this post

A List of Interesting Things (Idle Thoughts on a Sunday)

What's on the painting table without having a designated painting table (the curse of having things packed away in boxes). My current periods of historical interest/reading (in a haphazard order of sorts):
Game on :)
Posted by Geordie an Exiled FoG at 22:40 6 comments: Links to this post

Well June has been an oppressive work month with the action well away from the wargames table or hobby stores. Needing a mental break and refreshment of the dice rolling kind I head to a friendly club to soak in the atmosphere and voyeur on other people's games. 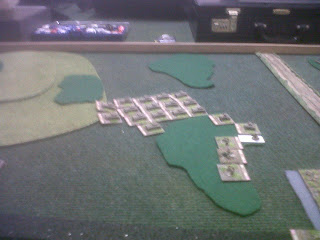 See above the British left flank is secured by a Cromwell armoured regiment. 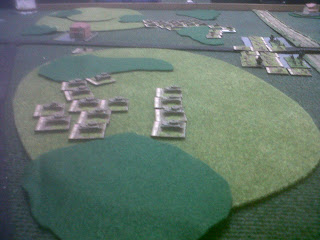 The scenario was a fluid encounter battle where the British had to cross a river, the Germans had to defend it. The Brits were armour heavy (in numbers) and infantry light, but the Germans had to split their meagre  forces and defend two crossing points and did not know where the Brits were going to strike. Above sees the British infantry getting stuck into a town fight (top right) with a weakly defended crossing point, but still hard going in such "defender friendly" terrain.The central (reserve) Cromwell armoured regiment takes the "high ground" on the watch for German reinforcements which turn up in the form of that MkIVH Panzer Battalion (see below). 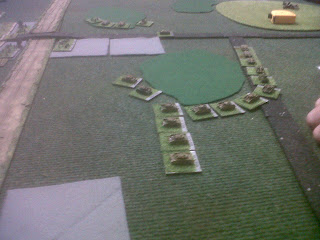 A stand-off ensues in the alternate "crossing point" town as armour without infantry support cannot pass through even this relatively weakly held town. 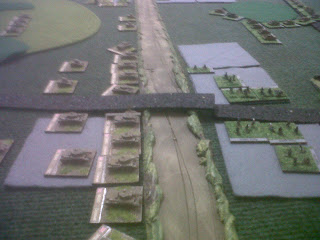 The British armoured regiment has to be satisfied with suppressing some of the German infantry with called in 25pdr artillery. 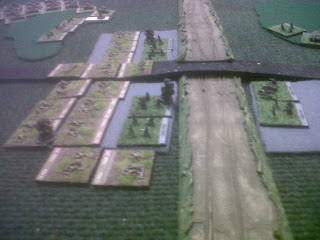 The game turned on the British infantry getting stuck into the river crossing point. The Germans bleed slowly enough for the game to go to a tactical British rather than strategic, as the MkIV battalion quickly evaporated under a combined hammering from two Cromwell armoured regiments. A nice looking game played under BGC (Battle Group Commander) rules which give a great WWII brigade+ level simulation.
Posted by Geordie an Exiled FoG at 13:18 4 comments: Links to this post