In tribute to the classic scene from Aces High .. a cut scene from last years (2018) Stockton Battleground ..

The "Defenders" were three SE5a's that provided top cover for the attackers (see below, an SE5a has caught a Fokker DVIIa unawares and dispatched it, no mean feat in itself): 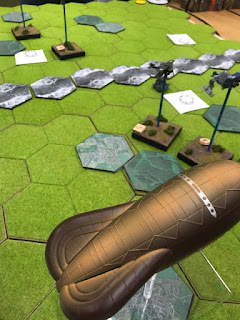 A mixed bag of Huns patrol the skies above the observation balloon (see below, an Albatross V, a DVIIa and an Austro-Hungarian Avaitik - I think): 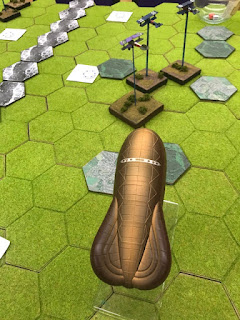 The "Hunters" tasked with destroying the Balloon are an old flight of Neiuports armed with tracer rounds and dangerous looking anti-zeppelin rockets - that look as dangerous to the operators as the enemy (see below, the balloon looks a long, long, long way away): 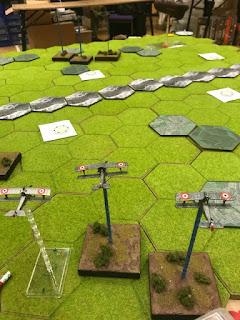 Not to worry the "Defenders" have your back (see below, always dangerous flying in close formation though as a rookie error could lead to a mid-air collision): 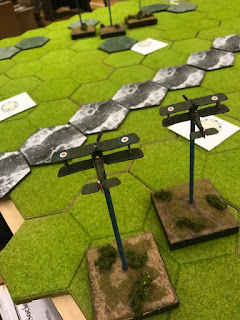 The Imperial German Air Service pounce (see below, with the advantage of height the Germans swoop low but themselves are exposed to deflections shots from the "Defenders"): 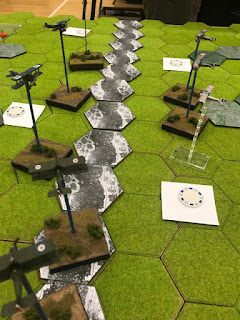 A maddened battle scene unfolds as the Aviatik explodes in smoke and flames, an Albatross claims an unlucky Neiuport and plenty of holes appear in SE5a's (see below, all plans of mice and men go astray after first contact): 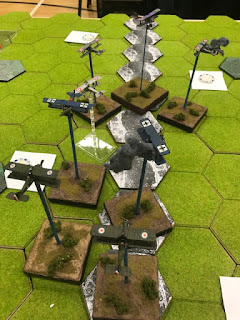 A close up of the dead Neiuport (see below, the artistic cloud of smoke is caught well on camera): 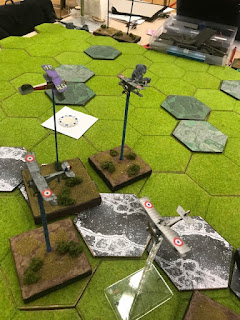 An alternative angle of the doomed Neiuport (see below, the war reporter and his photographer were having a field day out of this one): 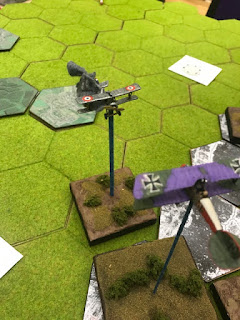 An SE5a goes down in flames (see below, the "Defenders" are paying a heavy price for protecting their charges and a Fokker DVIIa in the hands of a veteran flyer is a merciless killing machine): 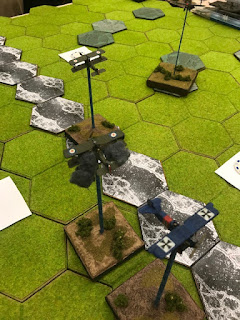 The observation balloon has been exposed to an attack run (see below, the two surviving Neiuports ready their monstrous anti-Zeppelin flares): 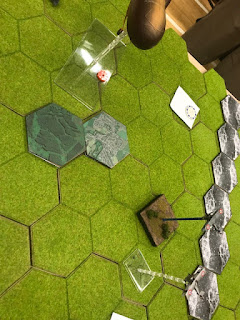 Another "Defender" pays the price as a SE5a starts to tumble earthward (see below, it means however that the Neiuports have their chance though): 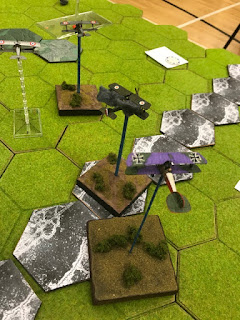 Again a different angle of the Albatross' "kill" (see below, three Entente planes have fallen to only one of the Triple Alliance - although the Italians no showed on a technicality): 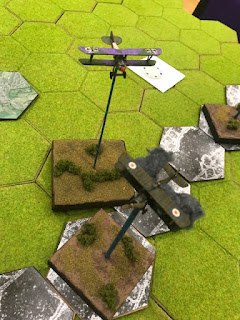 The first French pilot is unsuccessful (see below, for some reason the tracer and rockets do not work, oh fickle fate): 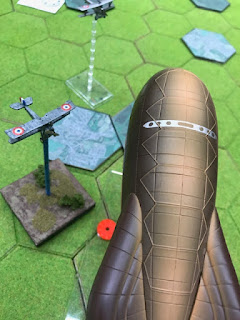 The second Frenchmen is a sure shot and takes delight taking down teh observation ballon (see below, "game-set-and-match"): 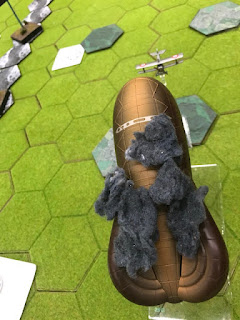 Success (see below, scratch up another kill for this brave Frenchman): 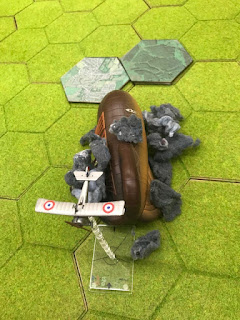 The Entente triumph for today and the offensive continues, but it has been a costly battle.
Posted by Geordie an Exiled FoG at 07:00 6 comments:

AI and a Dark Future?

Popular culture seems to be turning against Big Data and the Statisticians!
Posted by Geordie an Exiled FoG at 07:00 No comments:

In classic GW over production of tiny parts and pieces I present a beautiful little Orc Fighter Bomber (see below, Orcs flying in the 41st Century - I ask you, but it looks fun): 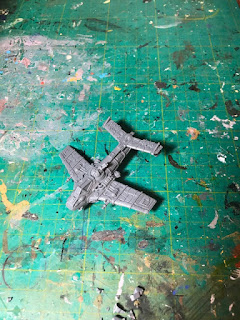 One down, several more to build!
Posted by Geordie an Exiled FoG at 07:00 2 comments:

Fresh from the GMT 500 reprint Napoleonic Command and Colours (see below, the wooden counters also saves "me" painting a lot of Napoleonic figures): 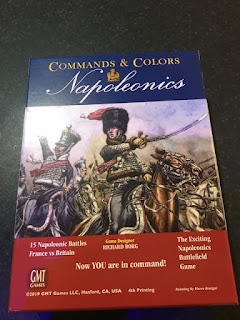 This may influence development of our hex based Napoleonic gaming system! Plenty of of winter play testing ahead!
Posted by Geordie an Exiled FoG at 07:00 2 comments:

My friend brought out into the light his latest project. A 10mm Napoleonic demonstration game of Leipzig 1813 for Battleground 2019 at Stockton, in November later this year. The inspiration comes from an old SPI/Avalon Hill game I think (see below, the portion of the battlefield we are play-testing, French to the left Austrians to the right): 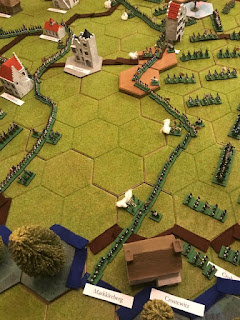 The Allies (on the right below) move forwards, the troops being changed into more atheistic configurations which is pure chrome but it is a demonstration game after all (see below, the French artillery welcomes them warmly): 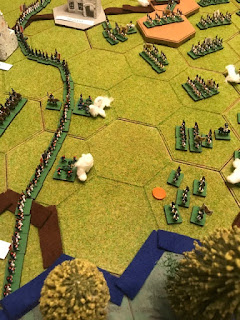 Given the condensed frontage the and intensely concentrated Austrians the French saw an opportunity for a localised forestalling counterattack along the river (see below, the initial results are encouraging to Boney's men): 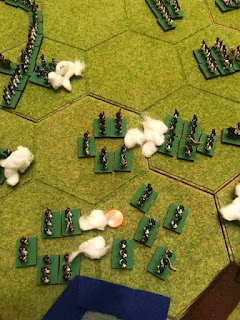 The French advance into a vacant town to secure a better defensive position and bring up support brigades which initiates and inconclusive firefight of sorts (see below, the battle is developing into a continuous front of skirmishing): 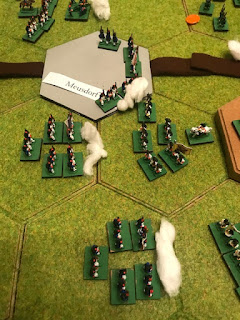 The Allies discover that attacking a town without preparatory bombardment is very risky and find themselves in headlong retreat (see below, the closely packed Austrian formations are thrown into disorder by their routing friends, nevertheless the Austrians have one opportunity against a disordered French infantry brigade facing a fresh Austrian infantry brigade [see bottom below]): 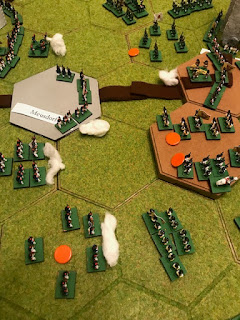 The French seem to have purchased by feat of arms a brief breathing space while the Austrians seem to be disadvantaged by their own "masse" (see below, coming out from the rallying phase of the rules is the keen ability of the French to rally from disorder quicker than their Austrian foes - an interesting national characteristic): 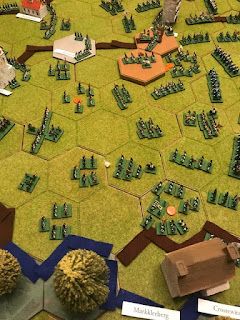 The Austrians come hard again at the French, focusing on a disrupted French infantry brigade that routs and a soak off attack in the centre that causes mutual disruption. The attack against the town continues unconvincingly (see below, their id a French unit moving (running away) in the 'wrong direction' which is of slight concern to the French Commander - who hopes Napoleon does not see it, but fears he does): 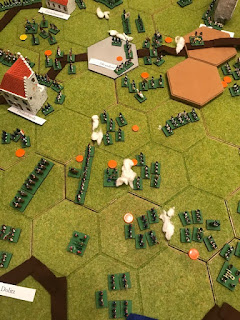 Reserve French cavalry brigades are brought up to support the flagging French infantry in the centre and protect the dangerous "one-hex-gap" that has appeared between the fiercely defended town and the rest of the French Line Infantry - just above the "hand of God" in the picture below. The success along the river is a mixed blessing for the French as it allows the Austrians to isolate French units if they stray too far forward in search of an easy victory (see below, the French have 'just enough but no more' forces to cover the ground they need to defend, the loss of even one unit could unpick their defensive position): 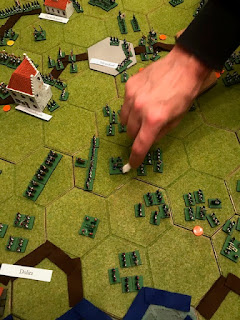 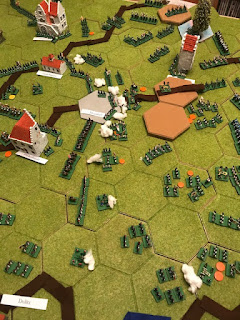 The French cavalry has successfully plugged the hole, causing great grief and strife in the Austrian rank and file. The situation is stabilised, but the French have committed a great part of their cavalry reserve in the process. The Austrians still possess vast reserves of troops, including their Guard. The second round of this contest is going to be far harder for the French (see below, The French commander in this sector is already scribbling a note to Napoleon for more reinforcements): 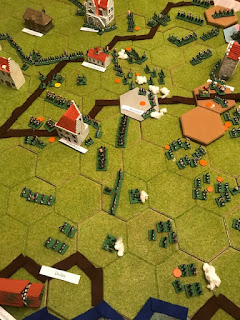 Play-test complete, the game was fun and seems to have great potential.
Posted by Geordie an Exiled FoG at 07:00 2 comments:

The origin of this modelling project was a rather dodgy cheap fantasy ornament picked up in a nick-nack shop - but I saw the "potential" (see below, after an undercoat of Airfix Primer, then a Brown Vallejo Wash, then a colour undercoat of Vallejo Game Colour Dark Green to get to here - though it has to be said I did have a lot of trouble with this particular Valljo Game Colour paint as for some reason it starts to separate out in the bottle into a solid and liquid half more so than any other of the colours I use in the range!): 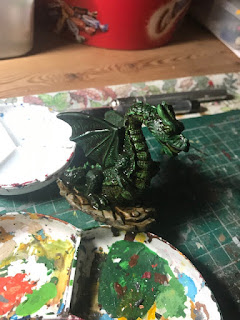 I added further layers of mixes Vallejo Game Colour Sick Green and Scorpion Green (I think, it was certainly a lighter green almost yellow) followed by a little Moon Yellow, with Off White added for final highlights. The "Glossy" look came from my experimentation with a Yellow Vallejo Yellow Ink glaze (see below, the Green Dragon's front with its lighter underneath is done): 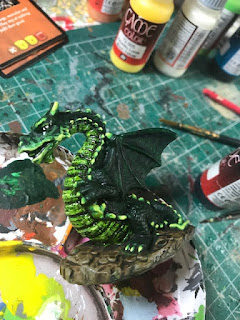 The scaly back was layered but kept to a Sick Green with touch of white highlight. Again I experimented with Vallejo Black Ink and Green Ink Glazes with a modicum of success (see below, a young fat Green Dragon about to fly off in search of food): 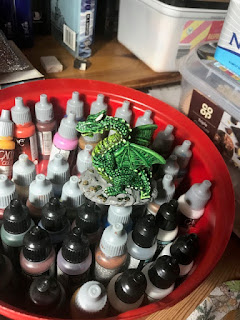 Nobody would want to mess with my Puff the Magic Dragon, surely? Please note, adventurers in my D&D Campaign have nothing to fear as this is purely a "painting challenge" with little or no relevance to the Lost Mine of Phalindar, despite the large picture of a Green Dragon on the front of the new 5th Edition D&D Starter Pack!

I was looking for a acoustic version of Classical Gas and found this:
https://www.youtube.com/watch?v=nHje3Fh4GJo
Posted by Geordie an Exiled FoG at 07:00 No comments:

Please Keep Off the Grass

In the computer trade sometimes hype breaks common sense reasoning. Perhaps I too have been guilty of this. Drawn along by the Agile Manifesto I sounded out the mantra of "Move Fast and Break Things Quick". Perhaps I should also remember the simplest and most powerful of mathematical techniques - always view the validity of the inverse argument to see if it is more powerful! So from the lips of the Microsoft President:

Maybe we all can be "Muppets"! Hey those are social media weapons of mass destruction.

Brad Smith's book - Tools and Weapons: The Promise and the Peril of the Digital Age
Posted by Geordie an Exiled FoG at 07:00 No comments: