Slow progress on the Fairey Battle, but some progress is at least is a positive report. I decided to have "my Fairey Battle" in an action 'bomb run' pose with her bomb bay doors open showing her deadly cargo (of 4 x 250lb bombs). In order to authentically do this the ordnance had to be painted yellow with red stripe to wards the tip, sigh (see below): 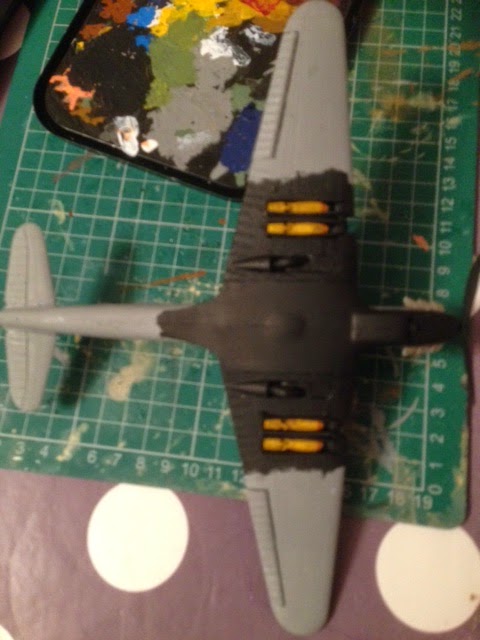 Yes it was a bit of a pain but I managed it. I even went as far as painting the interior area with a gunmetal dry-brush over a black undercoat. even though inside and 99% out of view. In my defense little bits do legitimately 'peek through' near the wheels. The bombs themselves were painted yellow, but built up from a dark yellow/light brown with two or three successive highlights using whatever was to hand (various Vallejo and Tamiya pots I think), then washed in Vallejo Umber Shade to 'dirty up'. All extreme perhaps, including the silly (but visible red line) I painted on by hand (having chickened out of doing it with the decals provided). The hope is to get the finished Battle looking 'rough and dirty' as befits its chaotic short life span on a French ploughed field runway before it was overrun by the advancing Germans.

Next step is to give it an overall basic paint scheme and then do the canopy!
Posted by Geordie an Exiled FoG at 23:58 2 comments: Links to this post

It may seen kind of late but this is what I got for Xmas on the modelling front (see below): 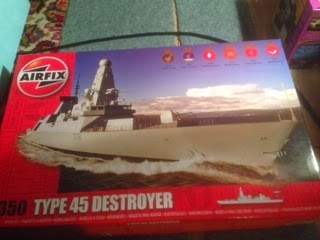 Courtesy of the Airfix "Black Friday" discount promotion when I 'hassled' the family about "What dad thought was cool for Xmas". At £20 instead of £50 it seemed a bargain. I think I have re-learnt this trick from the kids. I didn't stop there as I went a tad nautical crazy and picked up an E-Boat for £10 instead of the usual £35! (see below): 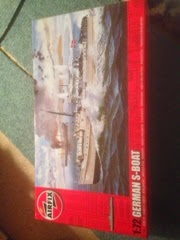 Last but not least was the Saturn V Skylab (£15 instead of £40). It'll come in handy for a Science Projdct honest! (See below): 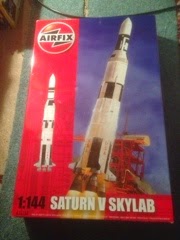 I was then tranqilised and sedated but not before I had clicked on the Cutty Sark Starter Pack (£2.49 instead if £8), a 1/350 spare RN Helicopter and Sea Harrier pack (£0.99 instead of £4.99) and an M3 Half-Track (£2.49 instead of £8) all just to qualify for the free P&P and perversely save me money on the order!
My excuse was that I was doing the family a favour and saving them all from hours at the "shops the ladies hate!"
Posted by Geordie an Exiled FoG at 00:31 4 comments: Links to this post

Something from the Weekend Sir?

Well along with sticks of rock and buckets of sweets from the seaside shops, Daddy picked himself up a curio from a little toy shop (see below): 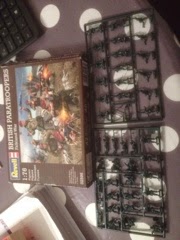 These ex-Matchbox, new Revell 1:76 figures are real classics. I don't remember Marchbox doing anything as interesting as the Falklands War! To be fair I fancy them taking a crack at 1970/80 era Soviets in the same way Paul down under has been playing recently ;)

Addendum: (see below I already had purchased the British Infantry of WWII pack, silly me, still on the look-out for the others though):

When I see any of this classic old range I have vowed to snap them up.


Note: The picture does not do them justice :(

Posted by Geordie an Exiled FoG at 11:07 2 comments: Links to this post

I applied my new favourite Airfix paint (Primer Gray) all over the Fairey Battle kit. I took time to paint up the crew and interior Cockpit Green. I did a little shade and base colour mixing even though the crew are going to be underneath a canopy (see below): 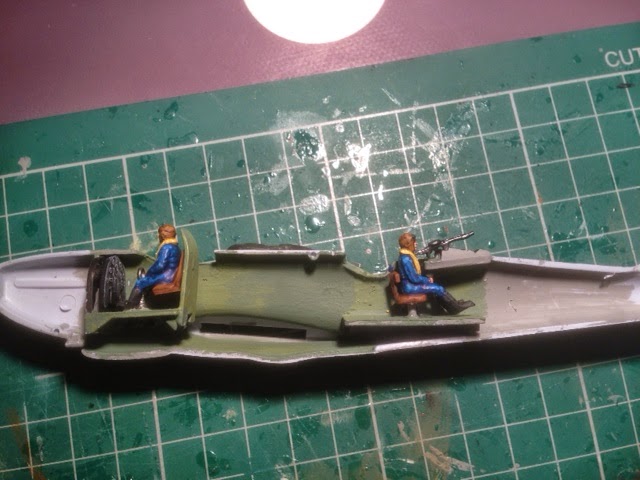 This is the point where I discovered I cannot find the decals! Yikes, frantic searching continues. Interestingly, the Fairey Battle has a crew of three, but one (the bomb -aimer/navigator) was hidden away in the belly of the beast.

Modelling Tip: The position of the rear gunner's seat is set as if the canopy is closed. If the more attractive 'action pose' is needed (as per my model above) then the eat and gunner has to be moved about a cm (?, if my memory serves me correctly, again see picture above) towards the tail. Otherwise the canopy won't fit correctly and it sits inconveniently on the gunner's lap. In the end I had to move mine twice

Next Stage: Putting it all together
Posted by Geordie an Exiled FoG at 07:00 5 comments: Links to this post

This may sound a a little ungrateful perhaps, but I would like to have seen the following kits re-released in 2015:

On a more positive note the 1/76 re-release of the original Tiger I comes as a "plus" (though it is not the best kit on the market the mold is probably the oldest) but I would have liked it more if it came with the correct stowage bin at the back and mud-flaps (seventh heaven if you put zimmerat on the hull). The mud-flaps and exhaust covers are some things I should do to my Airfix "pair" given that I added the stowage bins at the back (see links below):

In my fantasy world (because I think the molds are long gone) I would love to see the re-releases of:

This has been a long term France 1940 dream project, the infamous RAF Fairey Battle (AASF - Advanced Air Strike Force), possibly the "worst" [British] bomber of WWII and we had a few to chose from. I never got the kit as a child but when I saw the error of my ways and wanted one they were not around in the 1990's to 2005+. So I snapped one up when it was finally re-released recently (a few years back?). Now it is finally Fairey Battle construction time (see below for the dissected construction WIP): 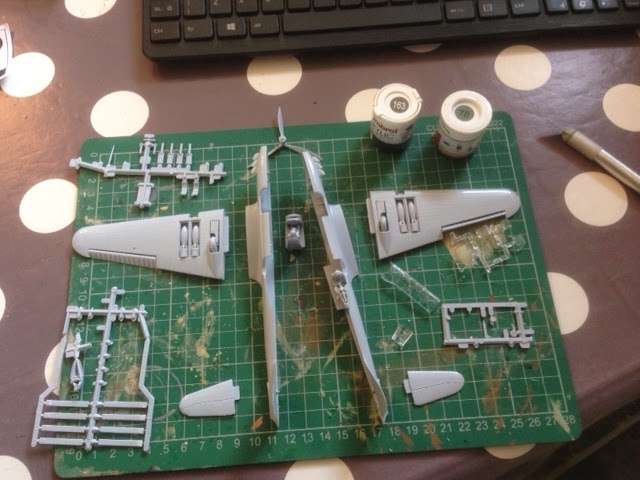 The parts are assembled into sub-assemblies ready for priming and then inside out paint with Cockpit Green and the RAF Flyers getting their blue uniform and yellow harness treatment. Originally I was thinking of getting three kits and doing an air scenario for the attack on the Sedan Bridgehead, a kind of early war 1940 style 633 Squadron attack (with everybody going down in a hail of light flak), but even light bombers are "big" to store in 1/72 scale. It may be more feasible to do this in Zevezda's 1/144 or metal 1/300, with my German 1/200 Blitzkrieg kit being the land elements/targets.

The latter thoughts must be considered to be in the "future project" category.

Posted by Geordie an Exiled FoG at 07:00 6 comments: Links to this post

Well I have been looking at the Perry AWI British Infantry on my bathroom shelf (my prime 'painting project viewing' position, despite the wife's protestations) for quite a while now and I have come around to the unsavory conclusion that I did not like the back rankers "poses". They were a little too lackadaisical for my liking. A bit 'camp' Boy Scout not really meaning anything, just lumbering along holding a musket in one hand. Luckily the Perry box has a huge amount of variant poses, so after a few surgical 'arm breaking' they were recast with more menace (see below): 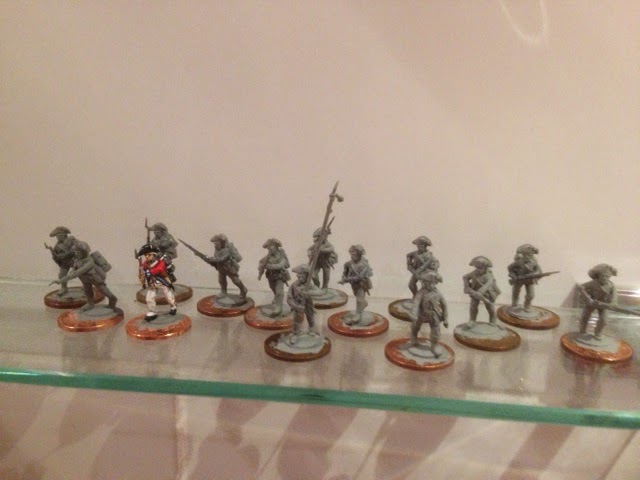 Looking at the spares still left in the box and I see that I can do the same again for the other regular line unit, maybe short by one pair of arms (the six lights in forage camp were already advancing menacingly). All-in-all still worth the faff for the end result, especially as I will have have to contend with Renko's elite 'well painted' troops when I finally get round to playing agame of Muskets and Tomahawks.

Posted by Geordie an Exiled FoG at 12:00 2 comments: Links to this post