More plastic model voyeurism
As recommended from the ww2modelzone blog 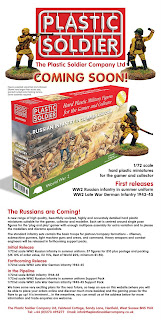 Some intriguing Russians on the way :)
If only I had the time to sit down and do things :(
Posted by Geordie an Exiled FoG at 18:00 6 comments:

While reading another blog (Tabletop Gaming News to be precise) I saw a link to Elhiem Figures.
I had a look and have to say I was very impressed.

Not bulk figures by the bucket, but very distinctive and very nice!

They are metal and I have drifted over to plastics as of late. I seem to be collecting various plastic manufacturers at the moment, but like SHQ, Platoon 20 and Drews Militia I think their (Elhiem) time will come for me ;)

If you dig into their site they have a RN Naval Party which in particular caught my eye.

How many times in your wargaming life do you get the opportunity to say in Vian style  "The Navy's here!"?

The painting brushes have stayed firmly rooted in the jam jar so far in February. A few figures have been meekly looked at but the room (man cave) is just so full  of clutter at the moment some serious sorting (nay a good Spring clean) is needed.

Nevertheless I have increased my stock of figures. I gave in to some long standing "figure lusting" and ordered via Hannants (UK) some plastic figures that had continually caught my attention. My only defence is that one packet in particular was of a limited edition and soon sure to disappear. They are: 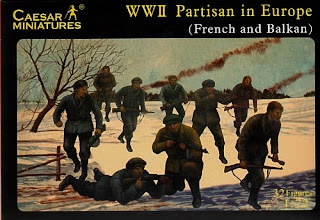 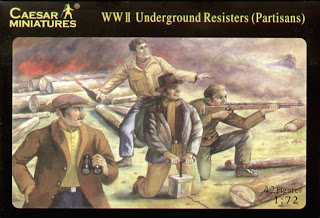 They came and I was amazed at their quality. Already pre-cut from the sprue in a resealable plastic bag which is nice, minimal flash (if any) and the most complete range of partisan figures I will ever need. Excellent detail. Already I am looking forward to painting them :)

I'll have to schedule them in straight after the Platoon 20 WWII British Infantry figures. I am eyeing Caesar Miniatures for additional purchases for their more standard infantry ranges. They certainly give the more expensive metals a good run for their money!
Posted by Geordie an Exiled FoG at 18:00 3 comments:

More on the WWII "Pacific+" Naval Project started in 2010

It all started one day when I dusted down an old copy of "Victory in the Pacific", an old but fairly reputable Avalon Hill board game giving a simple Naval campaign of the Pacific War going from 1941 (Pearl Harbour) to 1945 (if the Japanese Player lasts that long or hasn't won in 1943). 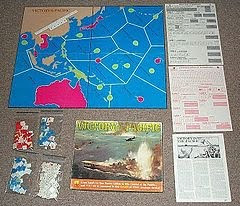 Rather than use the game's tactical battle system (which is sound but simplistic in flavour) I thought the board game would be an excellent mechanism for generating hypothetical but yet plausible GQII battles. Argh, I sighed wouldn't it be nice to include the other side of the world too. The North and South Atlantic, Arctic Convoys and the Mediterranean. I already have the relevant fleets for these campaign areas. I knew there was a prequel Avalon Hill game to this called "Victory at Sea" covering all this, but where to get a copy?

The E-bay copies I saw were annoyingly expensive.

Then wandering lonely through various blogs and web "Googles" I bumped (I do not remember exactly how) into an on-line store that specialises in digitised copies of these old style board games.

They had rolled everything up (both games, a connecting set of rules to make a world campaign and the Avalon Hill General Magazine articles) into a bumper package, at a price that made me smile. (No I am not on commission) 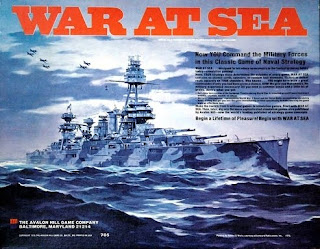 I took the plunge and am/was very please at the results :)

The major work is printing the maps off and gluing then together, an activity yet to be done. Also I will be tempted to partly computerise, via spreadsheets/database and a little programming of the game mechanics to cut down (or help) with the paperwork.

Still lots of Pacific painting to be done, and a few more Navwar 1/3000 models to chase down in the full course of time. That might allow for plenty of 1939 to 1941 Northern Hemisphere action first. As a footnote to the first "Victory at Sea" game, the mechanics and ship statistics favoured the Axis so by turning the battles over to GQII it might well be able to address this. Also, by NOT allowing the Italian Fleet to sail unmolested past "Gibraltar" (a huge geographical/strategic 'faux pas' in the original "Victory at Sea") the RN may have a fighting chance to make it through to 1941 to then face a crisis in the Pacific.

Madness I know, but we all love an irrationally large project (and please don't ask for a status painting report on those Goblins from Moria and their HOTT Army).
Posted by Geordie an Exiled FoG at 18:00 No comments:

Reminiscent of Pickett's fateful charge the high point of the French attack over the ridge only to face a mass of fresh infantry, cavalry and artillery. The cluster of horse on the ridge is not scattered cavalry but French generals who have "lost" their commands from out underneath them. 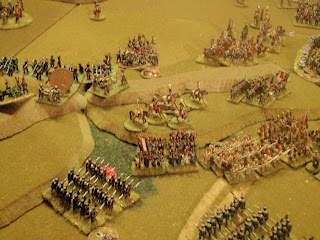 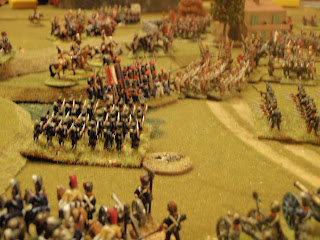 Exhausted, over-stretched and with Prussians appearing in force on the flank, the end is nigh 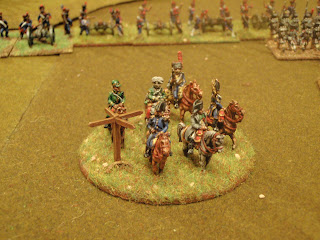 A sad dejected Napoleon who thinks what-if and other imponderables, with no further use for the mass of artillery behind him. The game itself looked a grand thing!
Posted by Geordie an Exiled FoG at 18:00 No comments:

Gosh, what happened to January, answers on a postcard?
Not a brush was picked up and barely a dice rolled in anger.
It is good to see so many other bloggers have been busy though :)

The must finish from 2009:
The brown chaps at the front need some attention, before I forget how I painted them 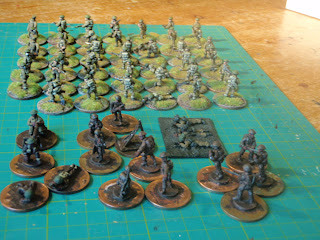 There is the much needed company supports (2" Mortar team[s] and a Vickers HMG), a heavy battalion 81mm Mortar, an engineer(?) stand and a few extra (to the '44 company Order of Battle) infantry. 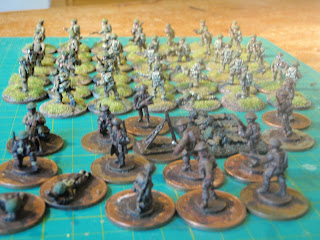 A background interest/project for me is twentieth century naval (WW1 and WW2), the French Fleet being something long looked at for campaign completeness sake in the Med 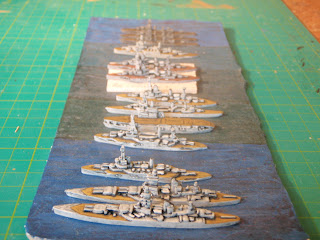 Lying at berth in harbour, battleships new and old. Some done but many off table to complete. 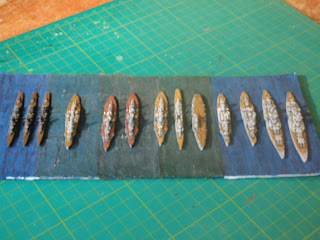 A close-up of the Strasbourg 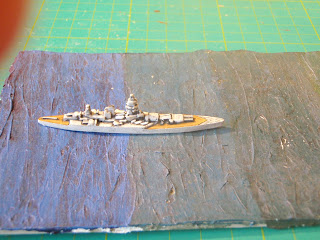 I have not as yet decided how best to base these 1/3000 ships, if they really need basing at all. Not forgetting the hypothetical Narvik battle to complete