To me modern (Cold War plus) warfare is a difficult period to game as although the technology is a known how it would have "interacted" is still a bit of a guessing game (but not quite as whimsical as Sci-Fi). The fact that NATO and the Warsaw Pact never traded blows is of an everlasting relief. However the "What-If" possibilities exist. One of my local clubs have developed a set of rules on from Modern Spearhead called Battle Group Commander which I find very informative to play.

The rules are more of a simulation than game, I participated in a clash between a Panzer Grenadier Brigade and a Soviet Motor Rifle Division. 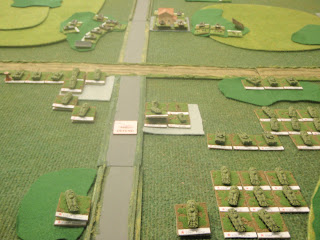 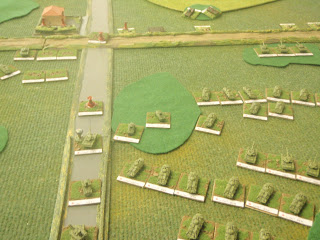 The Soviet right flank is in waves as opposed to columns, but pins to the left with a battalion and attacks to the right with two in support of each other. The Germans prepare to unleash a second turn of defensive fire. On both flanks the Soviet pinning battalions have suffered casualties due to the first round of defensive fire.

Continued exchange of  fire and contact on the Soviet left, from the pinning battalion: 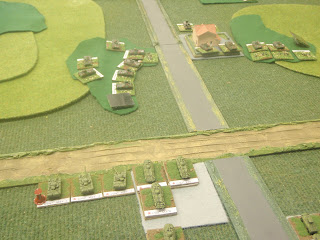 And from leading elements (T64) of the second (assault) battalion and regimental ATGW and FOO assets from the middle urban area (also helped by the Germans throwing low): 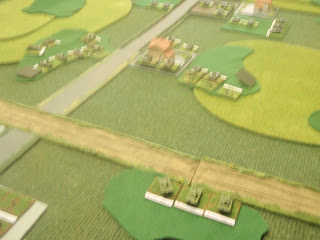 The battle continues ...
Posted by Geordie an Exiled FoG at 18:00 4 comments: Links to this post

Something so small but entertains those of a fine wargaming mind

Now this is a little stunner or eye turner of a model in 15mm: 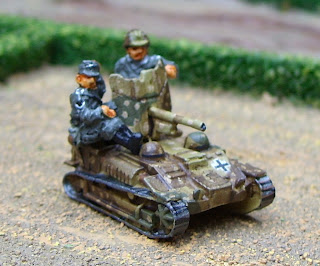 Something originally French but turned against its previous owners/side b y the Germans, apparently over 700 of the French UE carriers were modified and put into some form of use by the Germans. Try hunting a KV-1 with your killer 37mm weapon in that!
Sadly not part part of my collection, but rather that of a friends, which this and may other classy models can be seen at at the forthcoming event:
Tank Museum, Bovington [3rd-4th July] – The Defence of Fortress s’Hertogenbosch, October 1944.


A WW2 Battlefront demonstration game :)
Well worth a visit if you are their as they are a friendly, chatty bunch of souls who always put well researched, interesting scenarios together.
Posted by Geordie an Exiled FoG at 23:30 4 comments: Links to this post

[Non-Wargaming rant part]
To some "bush" would mean a tour of duty in a far off steaming jungle or a Kohima scenario. However in my perverse reality this is literally a bush clearing/replanting exercise in the front garden which has kept me away from the computer.

I say "bush" to you but secretly I view them as the "enemy" now, individually named and hated. My viewpoint changed soon after the first hand-to-hand engagement when I was  cut, bruised, bleeding and even left for dead by the wife in the front garden. Each bush is seven years old, deep-rooted with no intention of moving! It is a pity my rules of engagement state they have to be taken alive and replanted elsewhere.

Eleven of thirteen down and just two to go, then I can turf it with a placid bit of English lawn grass that should behave itself and also serve as a cricket wicket.

[Back to the Wargaming bit]
I think the real-life version of this little chap from Airfix (the Austrailian Matilda Hedgehog) would have come in very useful: 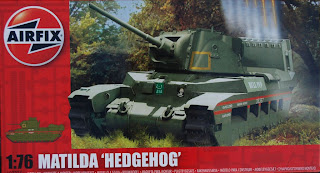 The state of play of my version: 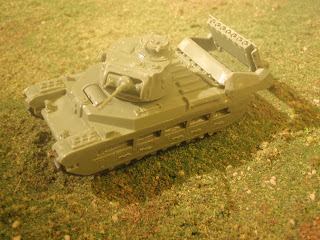 Each night coming back somewhat "bushed" I relaxed and kept myself sane by laying into my collection unmade "to do" models and a cold beer. The logic being that I am pushed for space and a completed model takes up far less space than the boxed kit. I have to say that the old Airfix kits (even with new bits added) are still a pleasure to make especially since the track plastic is now a much nicer and forgiving material to work with.

Great link to Matilda Far East Variants:
I would like to get both the flame-thrower Frog and Bulldozer versions in 1/72 or 1/76 too.

Likewise I have great respect for the Trumpeter kits (a KV-1 and a Pershing) I made as they set a new standard of excellence in detail and construction (IMHO), though certainly not fast-builds. The only down-side with my mass build approach is that I now have an overflowing "to be painted" collection box and they will not be wargame ready for a long time. In fact I sense the urge to do something in a smaller scale again :)

On the up-side I have also been busy "actually wargaming" and will post on the DBMM Ancient Campaign, a DBA, a Warsaw Pact v NATO modern, a WWI dogfight and a Peninsular Napoleonic campaign in due course.

Thank gawd I didn't have to mention the football. It is good to be back blogging :)
Posted by Geordie an Exiled FoG at 18:00 2 comments: Links to this post

The Curse of Googlemail to Gmail

What gives?
Googlemail to Gmail, just press the button :)
What could possibly go wrong?

A behind the scenes computer infrastructure change has destroyed my ability to read my Google emails :(
This makes it hard when you are trying to follow threads wit other bloggers and follow up on comments left etc.

Apologies for not responding to any questions normal service will hopefully be restored shortly!
Meanwhile back to kit construction ;)
Posted by Geordie an Exiled FoG at 18:00 5 comments: Links to this post

Back from the half-term trip to see the grandparents. Not much painting done but I took a few kits to make for the road-trip, attacking the plastic pile. During my shuffle through my unmade kits I found this little gem.

Not strictly a kit but the Airfix Italian WWII 1/72 infantry box set. To be perfectly honest I was not expecting that much from the contents but I was more than pleasantly surprised :)

Excellent clean figures, good poses, well detailed and smartly sculpted, not what I was expecting from Airfix, thinking back to the 1970's moulds still in use. 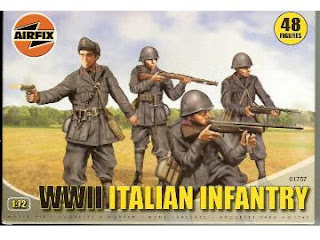 OK, these may be old figures to some, but anything post-2000 is a rediscovery for me. I plan to mix them with my Esci/Italeri 1/72 Alpine Itailians too for a better mix of poses and weaponry.

One to an excellent example of how they paint up.
Quite inspirational.

Another reviewing the pack (of note, according to this site these Airfix figures are also being marketed by Waterloo 1815 and HaT!). I agree with the ratings given, (9's and 10's) and even the harsh one  (of 4) on the number of different poses, although I would also add quickly that they are all good and usable on table.

Meanwhile I have continued in a bit of a model making spree, the mountain of unmade kits has suffered a major reduction. I seem to go in spurts of one type of activity rather than finishing a specific project.
Posted by Geordie an Exiled FoG at 22:42 2 comments: Links to this post