I am painting some 1:144 kit for this little beauty (see below): 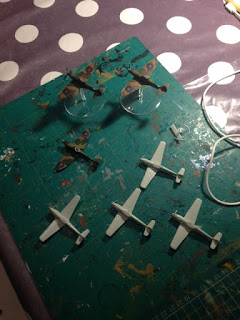 My 15mm Spartan Army needs an upgrade. As per many DBA armies they came from the "minimum number of packs of figures" because I paint slow attitude. The first rank of the "phalanx" are from three packets of Chariot Miniatures HOG20 traverse Spartan crest, which means they are all officers. This bugs me so a while back (read years ago) I got some normal hoplites to "add variety". The time has come to paint them (see below): 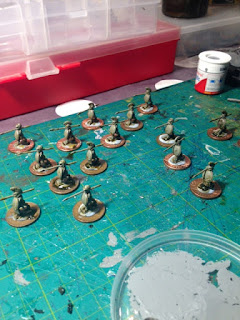 Coated in my preferred primer *Airfix 01 Grey Undercoat) then experimented bringing in a technique I used in 28mm figure painting. A brown wash (Vallejo) which softened the edges followed by a black wash to add definition (see below) 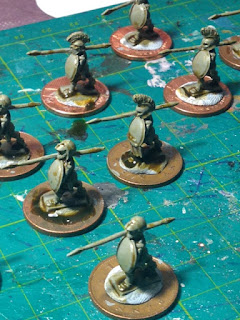 Next I shade coloured the figure, but learning from Tabletop Minions on a previous post. I intend to paint as few layers as possible to leave the metal as c;lean as possible. So I intend to put down a strong mid-tome and minimal highlight (see below, base coated): 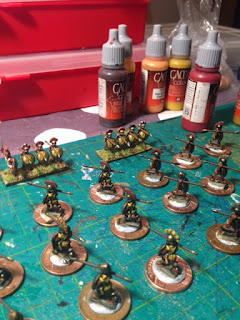 If this goes well I will have another four more bases of officers to spread out into sixteen bases of hoplites ;) I only hope the new style of painting goes with the old style of painting.
Posted by Geordie an Exiled FoG at 07:00 No comments:

Auible Books review .. and crazed mini-rant about "THE NAVAL CRISIS"

It all started with a external business consultant where I then worked introducing me to the CD format book for the car. Albeit a rather strange book called:

1: How to to Think Yourself Rich (Business Theory)

Which was state of the art thinking circa 1910 (I kid you not). I then found Audible as I was having trouble reading through "7 Habits of Highly Effective People". Listening was easier than reading certain "text book types" for me. I then found the "bug".

Another fourteen books followed, mainly business(ish) (see below, exclude the four from the second picture below that also appear in 2016 new job): 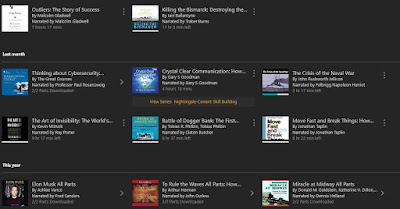 A grand total 53 Books I would not of otherwise read!

All of them were in some way engaging and interesting but one book was alarming! No not the France 1940 book Why France Collapsed (although it did have many strange tales to tell), it was the Jellicoe one: The Crisis of the Naval War.

Scary in that for the 8 hours and 20 minutes of its telling, the first 1 hour twenty minutes described the various Admiralty Departments and Committees "than ran the war" and why the Admiralty was a cumbersome beast to change in a direction it did not want to go. There was a a further hour describing how awkward it was to spare destroyers for anti-submarine work and how clever we were routing ships around the trade roots (cleverly avoiding the delays of convoy congestion - merchant captains would never be able to sail in a formation akin to a battleship squadron and its meticulous station keeping). Jellicoe was a brilliant naval officer (specialising in battleship gunnery) but in his summation of year of crisis he barely mentioned but in passing the convoy system that dramatically turned the tide (less than an hour). The drop off in sinkings once the convoy system was in place told the tale. He focused on developing [ineffective] hydroponic detection (not ASDIC that came much later in between wars) via trawler flotillas and Q-ships to hunt the U-Boats by luring them into attacking them. Detailing types of mines, the efforts to place armaments on merchants ships and statistics of training merchant seamen to fire them.

However the long and the short of it was that without the convoy system the submarine was an invisible killer than no warship could find. By guarding the merchant ships the U-Boats at least had to reveal themselves in attack and thus open themselves up in turn to be attacked. An even more salient point was that "convoys" were actually as hard to find by the act of concentration of many vessels in a tight area as a single ship. The oceans were suddenly denuded of targets. Jellicoe seemed to be the wrong man for the challenge and he had little to say about his political masters forcing the change (Lloyd George).

In all fascinating but scary at the same time, I literally did noy believe what I was hearing (the book was published in 1920).

Perhaps not much to look at just now but this is an interesting collection of useful light troops from the Gripping Beast Plastics range. Some forty figures all told, with sixteen slingers (skirmish), sixteen javelins (skirmish) and eight miscellaneous unarmoured spear/sword/axe (see below): 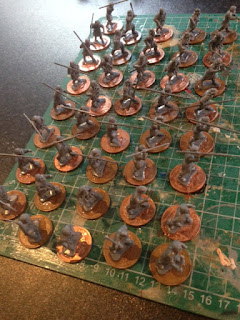 These filler troops can be used in the Saxon, Viking or Norman "order of battle." A very good buy IMHO!#

I am looking forward to some "1066 and All That" action (or at the very least painting)!
Posted by Geordie an Exiled FoG at 07:00 2 comments:

I cannot complain with respect to the number of figures you get in the Conquest Game's Norman Foot Soldiers box, forty four all told. Smiles all round. This immediately helps flesh out the "Invading French" (aka Norman) Army of 1066 'Saga' Campaign (see below, early days on the painting front, initial basing courtesy of UHU glue waiting for a spray painted undercoat): 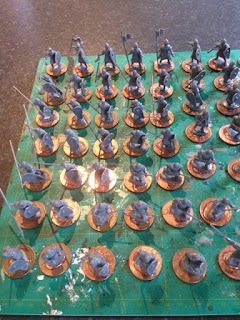 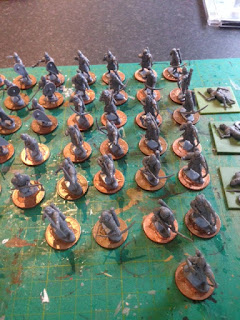 All that remains is to pick up a couple of boxes of Mounted Knights to complete the Norman "order of battle".

1/72 scale Airfix Fw-190 is finally finished (I say finally but I [we] know that there really should be swastikas on the tail, but thanks to European law they are now illegal to sell even on historical models (!), so I would have to "free hand them" which I frankly bottled doing), so it should now be hung up like the Star Wars TIE Fighter (see below): 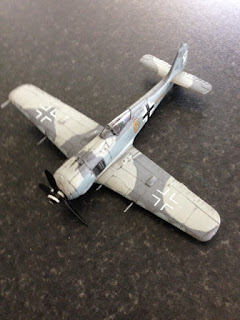 A slightly bigger (1/48) Airfix Spitfire Vb, now repaired with "odds and sods" from the spare box. The 20mm cannon, rear landing wheel, aerial and "watch your six" mirror, Requires a bit of touch up painting (see below): 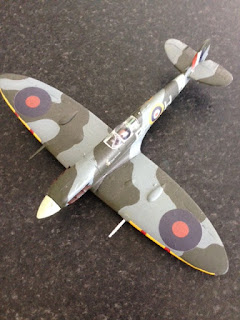 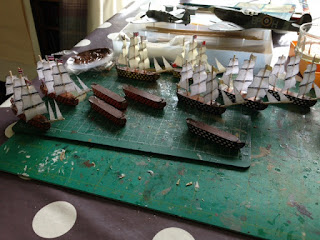 Note: The ship building has had to been put on hold to be resumed at a later date. The dockside crowds are chanting "We want forty!" But the wife is pointing to some DIY painting jobs to be done first!
Posted by Geordie an Exiled FoG at 07:00 3 comments:

While walking through a model shop one day I came across a small lonely (but beguiling) Russian light/fast bomber (see below): 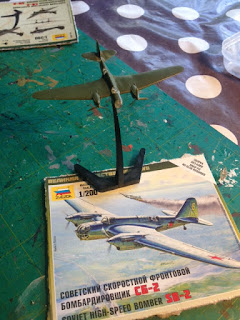 "Gawd Bless Zvezda" for catching my eye, stirring my curiosity and needless to say opening my purse! I am sure I will find a use for it (eventually).
Posted by Geordie an Exiled FoG at 07:00 No comments:

Confession: I picked up the Napoleonic "habit" (very) late in my wargaming life (in my 30's) and though I retain an interest in Napoleonic's, it is very much on the periphery of my wargaming interests. Having said that I always wanted a deeper look into the history and after reading a few of the more "generic" Napoleonic histories I still wanted to understand the theory and practice of the battlefield tactics. A (Grognard) friend recommended Brent Nosworthy's "Battle Tactics of Napoleon and his Enemies" a a detailed primer (see below): 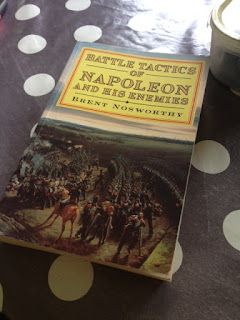 A weighty tome in itself, some four hundred and sixty pages of detailed practice and theory. All good stuff. Alas, my reading of it however was hampered by moving cities, a pause in my wargaming hobbies and then other periods (such as ancient Greeks and WWI/WWII) took my attention. To my recollection I have started and aborted reading it at least three times, but eventually (approx) fourth time lucky and I have finally finished. Ahem, like I said it has only took me some twenty years.

One conclusion I came to is that given the complexity and breadth of the Napoleonic period, it's a bit like ancients IMHO, would any one set of rules really stand a chance to capture changing dynamics of the period. The Peninsular War being radically different to Central European campaigns, West v East European conflict  is different in themselves, pre (Reveolutionary) 1800, [early] up to 1806, [middle] 1807-1812, [late] Napoleanic (Russian Campaign) and post Russian Campaign to Waterloo. It also explained in a long-winded way, why the Napoleonic period is so, so problematic to play as a wargame. It also told a sanguine tale that much of what we call intrinsic to the "Napoleonic Period" was manifest in the earlier "Linear Period", and the transition to "Impulse Warfare" was not just about Napoleon. I feel inspired but at the same time daunted to take up the Grand Tactical mantel. Napoleonic's always seemed to generate fraught games, with the players seemingly thinking so much was  at stake. I may bounce into a spot of "light-hearted" Sharpe Practice 2 (aka I should paint up some of those 28mm plastics I have in teh loft), look mischievously at the few battalions of 15mm I possess and ponder curiously at a large mass of 2mm Napoleonic's I acquired (half painted/half virgin lead).

Meanwhile: I feel the strange need to read Nosworthy's book on the earlier Linear period, Marlbrough, Frederick the Great and the tales of the "War of the Spanish Succession." The only question being "Will it take me only another twenty years?"  But it is a considerable gap in my knowledge that needs filling.

A piloted V1 "Wonder Weapon" (Fieseler Fi 103) .. or a one way ticket to oblivion on a flying bomb as you have to parachute out near the target and I guess you er, walk or perhaps swim back (see below): 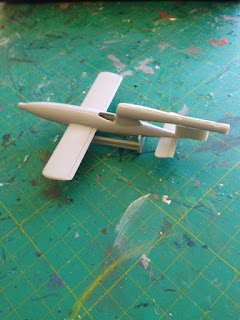 A one-shot rocket fighter called the Natter (Bachem Ba 349-A) which is at least armed, something useful when entering the 1944-45 Allied Bomber Stream. Once out of fuel it is a case of parachuting put again and a long walk home (see below) 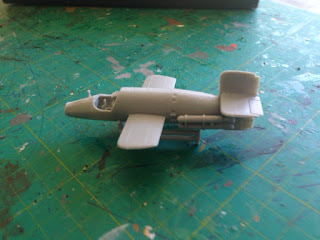 Are these stange machines partly to blame for the sightings of "Foo Fighters"? Next, how to wind them into a scenario of sorts?
Posted by Geordie an Exiled FoG at 07:00 No comments: