I think the greatest compliment I can give a game designer is "Thank you, you inspired me to play and from there I made my own version of your game." Small Wars is already worth its weight in gold to me (see below, also see The History of Wargaming Project - Small Wars): 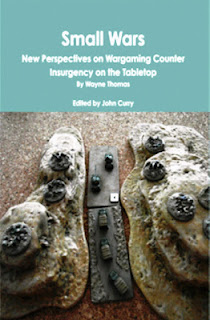 I played one solo and one group game of "Six Months in the Sahara" French Foreign Legion (FFL) game. Both games ending with the FFL being overrun with hostile Arabs, dying (if not lead) in the finest tradition of The Legion (see below, the "homemade board): 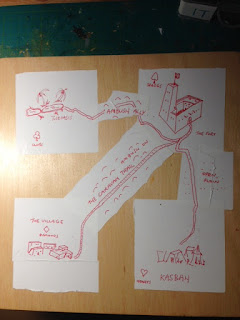 What is more the "system" was taken one step further and applied to the apocalyptic world of "The Walking Dead" (see below, spoiler alert "everyone died" in a glorious do or die battle at the end): 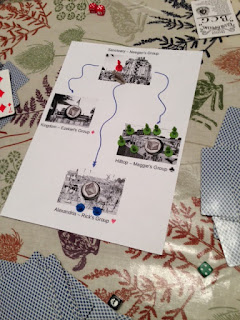 The sign of a good game is one you enjoyed playing. The sign of a great game is when it inspires you to make one of your own for others! Thank you Mr David Wayne Thomas, the fun continues as I contemplate the Soviet invasion of Afghanistan.
Posted by Geordie an Exiled FoG at 07:00 No comments:

Captain Dorki spat in the direction of the Maxim MMG team as they headed back towards Company Head Quarters. "To hell with them, they sat on their arses and shot at shadows." Yes, they kept one half of the sector quiet as a mouse, even claimed to have killed a German officer in a house, but Dorki knew that bullets could not go through thick walls or turn corners. No German dared show his face to the MMG but as a consequence the other half of the sector had burned like hell and took too many of his men. Fifty per cent of his under strength platoon had fallen. The Germans had bled too but it was his troops he only cared for. "The Patrol" bad been bounced back towards the Volga and the Germans were sure to come again fast on their heels, following up their success sensing an easy victory. Damn them!

Dorki took a slug of Vodka and looked up at Lt Pasha. The man was the sole survivor from his squad. He looked broken, ashamed and confused. Dorki had literally run into him, in fact he had knocked Pasha down as he fled in terror from the "Hell House" - elite Panzer Grenadiers had fought his Rifle Section hand-to-hand, dying together in a not so elite fashion. The German's had just been quicker to follow up. For that Dorki blamed himself not Pasha. The man was a hero. In the trench Pasha's uniform was still smouldering from the fury of the German hand grenade attack. Dorki pushed his revolver across the table. Pasha looked terrified - what did his Commander expect him to do? Then it was it true, he was a coward as he feared. Dorki spoke with menace, "Pasha you have been to hell and seen the Devil himself, next time, you take my revolver and you put this bullet in his skull." With that Dorki held up a polished bullet, spat on it, cleaned it his faithful oily rag and handed it to Pasha. The transformed Pasha had eyes of steel, "Yes Comrade Dorki!" With that he turned and headed out down towards the Volga to round up badly needed troops.

Dorki mused. The Devil. He meant it specifically. That tall Aryan Devil. Dorki had caught a glimpse of his counterpart through the haze of battle and burned his features into his brain. He would meet him again. Next time he wouldn't let his men be pulled so easily into a close quarter fight in a house. After Pasha had fought the first combat, a bloodbath to both sides, he had lost Mendalev's squad exposed in a trench. He had left them too close to the house when the Germans followed up. He would have be be more careful, much more careful lest these "elite" Panzer Grenadiers slowly chew his men up piece-meal. He was in a dark mood. After fateful minutes Dorki's eyes met Romanov, a noble name to the most ignoble cold blooded killer Dorki had ever met. Romanov sat in the shadows, adjusted the sights on his sniper's rifle ever so slightly. Dorki had respect but no sympathy for The Devil, especially since Romanov had lost a good friend, a drinking friend, a true blood friend in Pasha's squad. "The Devil's mine" said Romanov and departed into the night. Dorki crossed himself an old habit still practised out of sight of the Commissars .
Posted by Geordie an Exiled FoG at 07:00 No comments:

The Stalingrad Campaign has Started

The Chain of Command action has started and casualties are mounting in Stalingrad:

It was a hard, harsh return to the Chain of Command ruleset!

Facing seemingly overwhelming numbers the King and his stalwart Royalists are forced to fight a battle not of their choosing. Starting from the top and they progress down the table to attack the Parliamentarians force defending the hill at the bottom of the picture. On the right hand side of the battlefield is a considerable body of Parliamentarian cavalry under the command of one "Oliver Cromwell" (see below - the time lapse sequence reveals all):

However Cromwell falls during the fighting on the Parliamentarian right and this change of fortune gives the Royalists the opportunity they need to take the initiative and take the centre of the battlefield with their redoubtable infantry. A remarkable Royalist victory and a very close run thing. (Note: In the above photographic sequence the smoke denotes combat and the orange markers denote a "state of disorder.")
Posted by Geordie an Exiled FoG at 22:42 2 comments:

As I was walking through "The Works" today ...

It began as a mission to get a "ship" that has Colonial gunboat potential (see below, blame Bob Cordery): 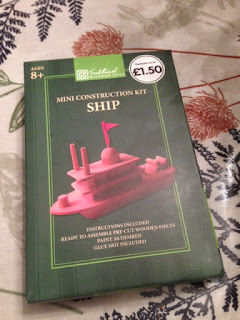 Then I discovered a rather nice "dice" find (see below): 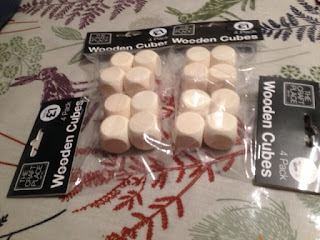 This will allow multiple "customised" dice to be constructed.
Posted by Geordie an Exiled FoG at 07:00 3 comments:

Brought some "friends" back from the Isle of Wight with me: KM Scheer and KM Lutzow (1:1200)

Holidays offer unexpected opportunities. Sometimes you come across the most sumptuous of things in the most unexpected places, like a haberdashery shop. Along with the cotton reels and needles there were hundreds(?) of ex-magazine (Del Prado?) miniatures - mostly planes and Sci-Fi machines. However these pocket battleships caught my eye (see below): 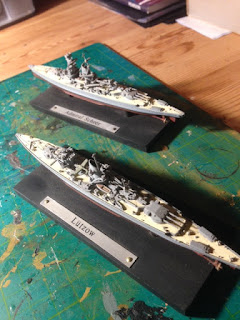 I have a couple of County Class WWII British cruisers courtesy of the Airfix 1/1200 "Sink the Bismarck" set but I could do with a couple of Leander light cruisers! The scale .. well it will do for me as 1/1200 ;)

Alternatively, these two and the KM Scharnhorst against HMS Hood and perhaps HMS Suffolk! Fletcher Pratt beckons!
Posted by Geordie an Exiled FoG at 22:55 4 comments:

While up in the attic I came across a "plastic mountain" of WW2 figures I had acquired. These seemed to be purchased under the auspicious title of 'other personal infantry transport'. Or: "How to make the German Landser go faster than his two legs". After all it is a long way to Moscow and Tunis (see below, left to right - motorcycle [Italeri], horse [HaT] to bicycle [HaT]): 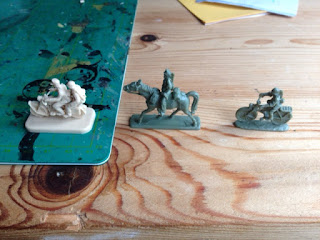 These were obviously down the priority list to do but I like their eye-candy flavouring, particularly if I am trying to use my toys as higher level markers in Matrix Style (or "operational") games as opposed to 1-for-1 tactical representations (although that is still 'cool' but requires much more painting). I was really pleased with how the HaT plastics took to the "cheap £1 superglue" I used. In addition the riders came with alternate heads which I successfully used. The models above [green ones] are the basic 'out of the box variant' but I found the plastic was amenable to "cutting [like soft butter] and head swapping". The Italeri kit was very nice and fit together well (but as the plastic is much harder it would be a much more difficult [although not impossible] to use for conversions.

Note: I may be moving into an era of customisation of basic figures.
Posted by Geordie an Exiled FoG at 08:00 No comments: