Picked up this collection from CoW2021 (see below, a set of sci-fi troopers to battle beyond the asteroids - apologies for the distant shot but please trust me as closer-up they have an Oriental Samurai look): 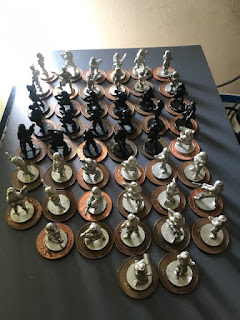 Team A will be pitched against (or with) Team B (see below, a funky street-punk feel to them IMHO. Apologies as I did not catch the manufacturer .. maybe GZG or Outland?) 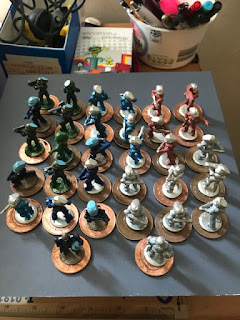 They have been given the Army Painter spray undercoat treatment (see below, I am thinking about colour scheme - shiny metallic jumps to mind): 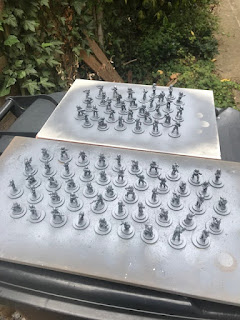 As to rules Star Grunts, Traveller's Striker and Rogue Stars-Stargrave, as well as perhaps an excuse to crack open GDW Snapshot. Think I will use them to battle against my Cybermen and Daleks for started and perhaps StarGrunt .. although I spotted that they have their own figure ranged released!
Manufacturing Source Confirmed as: Ground Zero Games (GZG)
Posted by Geordie an Exiled FoG at 07:00

They look great- look at the Nordic Weasel 'No Stars in Sight' system as a possiblew contender for the rules.

Cheers Pete - will do

The helmeted troops are GZG Stargrunt 25mm UNSC troops. If you feel like a game of Stargrunt II let me know - I have some Islamic Fed infantry around somewhere :-)

Just a case of me painting them then .. that seems a familiar theme.