With some trepidation I started to watch Episode One of the new BBC - SAS Rogue Heroes series. It had come with dare I say it, surprised recommendations from fellow some wargamers whom I deeply respect for their taste and acumen, so I took a deep breath and watched (or rather binged it on iPlayer). The jury was out in parts, the legend and the lore of the SAS are so easily overdone but as the story progressed I was totally hooked (for better or worse) but would it hold up in the cold light of day? It certainly had all the trappings of a professional marketing sell, the line-up of actors had clout, a "sexy rock and roll-heavy metal" sound track to boot and a very pacey delivery! (see below, would this montage of history, fiction, rock music and brat-pack acting [in a good sense] actually work?): 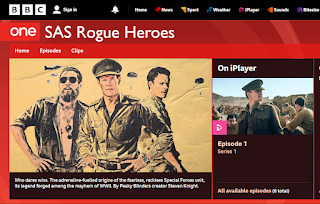 And the verdict was .. well .. after some (short) deliberation .. I thought it was bloody brilliant! Somehow it all came together and seemed to get the gist of all the madness and stupidity associated with that era of the war - spot on. The wife even watched the series all the way through with me (partly due to the link with Sex Education actor and the lad who played the strapping Irishman [despite the beard]), it was simply such gripping television. Well done BBC how you pulled this off I do not know, in my heart I was expecting a "bitter lemon". There should not be a way that 1970's and 1980's rock music [Motorhead] could work for WWII - but it did. How? I still don't know, but do not care! Previously I was an instrumental "Where Eagles Dare" soundtrack person for top war stories but heck, (Rock Music) it worked, along with racing jeeps across the desert. You would, wouldn't you? The depiction of the LRDP was superb, they could have been over easily done, but no, a taxi service with guns who could navigate the desert like nobody else could. As for the storyline: I was laughing at moments, crying at moments and literally in awe - terrified at what was going to happen next - moments when I though "don't be daft - they wouldn't would they?" It has left me rushing for Michael Asher's history of The Regiment for the back story (it has been on the bookshelf long enough waiting to be read) .. and I bet I will get an Xmas book (and there are a few of them already out there) from the supermarket book isle! Sure I will find "discontinuity errors" as bits will have been simply "ripping yarns" but I love the disclaimer .. "the most incredible and unbelievable bits are the bits that are probably true"! Spoiler alert .. the last episode ended with Stirling down (captured), but will there be a Series Two following Paddy Mayne (and perhaps shots of Stirling musing in Colditz)? Meanwhile I unpacked "Undaunted: North Africa" and took a look at my 20mm Western Desert collection (with the classic LRDP set and some Dixon SAS metals, Strelets SAS-North African figures and Italians/DAK). There is a game or two in there to be had there ;)
Posted by Geordie an Exiled FoG at 23:39

I thought it was a lot of fun even though a bit OTT in places. Lovely kit and vehicles of course, someone had made a real effort there. And who doesn't love Motorhead, The Damned and The Stooges on a soundtrack (and for real nerds the choice of the Stooges "1970" was interesting as it was covered by The Damned as "I Feel Alright").

Totally agree - in fact, this post has just reminded me, I still have episode 6 to watch - being in NZ we got the "new " episode every Monday - part 6 would have been available on 5 Dec but I forgot about it!
A friend was unhappy with the "Cardboard cutout" portrayals of Stirling, Mayne etc, comparing it very unfavourably with the Lawrence of Arabia film - but I don't think that's a reasonable comparison anyway - it was a 6 part BBC TV series, not an international film!
I think they must have exaggerated how mental Paddy Mayne was - I sincerely doubt even an officer would get away with beating up military policemen, and bits were added to appeal to the prejudices of current viewers (not sure some of the stronger language would have been in use by the upper classes in the forties - C word, I am looking at you!)
To be honest, I dont think Stirling was anything like as pleasant a personality as he has been made to look here, but thats ok - its all great fun and as it says, mostly true - and the addition of the entirely fictitious French intelligence officer was very easy on the eye!

Never saw this, but have watched Sky's three parter re the real SAS. Now that was brilliant and very, very poignant. Recommended.

With you on that rross .. as for teh French lady, I was captivated but somewhat alarmed by her British counterpart in Cairo

Thanks Independentwargamesgroup I will try and get myself in front of a Sky Box over the festive period ;)

Just watched final episode, a slight anti climax I thought, but then I didn't know the real story, so obviously, Stirling was captured. I had to question the circumstances as portrayed...looked like at least a platoon of Germans plus a PzKfw III....how did the other two manage to get away...? Surely, in reality, the terrain must not have been that open?
Shame the madamoiselle had to perish to tidy up that story line though! As to her British counterpart, he was real and unfortunately probably quite like that in real life too, knowing the type of chap the security services had working for them back then....mind you, at least he as the a Soviet agent!
Anyway, overall, an enjoyable romp but possibly a bit fast and loose with some of the details, including what a thoroughly unlikeable character Paddy Mayne was! ( surely, he cabinet have been THAT bad??)

I know what you mean rross about the anti-climax capture .. from what I read it was even worse than was was shown [no battle] somewhat farcical as a rear echelon DAK Flak unit captured Stirling and one other while they were sleeping [literally bumped into them]. He escapes .. by literally "just scarpering" off when they weren't looking (he figured the most likely escape is soon after you have been captured and you are not that well watched) .. but was over confident .. hung around too long as was "scoping an airfield for an SAS attack .. bumped into an ARab .. who told him to follow him .. and duly handed him over to a DAK patrol in exchange for "some tea" [I sped read the Michael Asher section on this so apologies if I have gotten anything wrong!]

LOL - yes that sounds exactly like his personality - over-confident by an enormous margin! Escaping as soon as possible after capture is exactly the advice we were given on an Escape and Evasion exercise at Otterburn, circa 1984, so that was probably correct!
I wonder why they felt the need to change the capture story though - he isn't alive and virtually nobody watching it would care one way or the other - it's not like it would bring the SAS into disrepute or anything.....

It strikes me as being a real Marmite series - you either love it or loath it... I made 15 minutes before I gave up, so I guess you can figure out which camp I'm in! LOL...

I understand where you are coming from Steve-the-Wargamer, but I managed to get past the 15 minute barrier and sunk "into the groove" ;) I did like the clamour and chaos - of what was supposed to be a carefully orchestrated war from Cairo! But I was impressed with the kit used!