Black Seas and the USN

Here's my story. Many, many moons ago I purchased Black Seas and expected to dive into the "age of sail" in 1/700 scale and be a Horacio Hornblower reborn. Except, the wargaming butterfly that is I moved onto another project (anybody not see that coming?) way before paint met model and rigging sail lead to s a sense of frustration, so the box sadly languished in a dark place the loft. I did construct the free (well you had to but the magazine) giveaway frigate from the cover of a Wargames Illustrated magazine, but no further progress was made with a fleet. Then (several years later) a wandering eye in the local model store, sees a bargain but - end of stock - USS Constitution, the rest is predictable history (see below, "a love story starts" with an American super frigate): 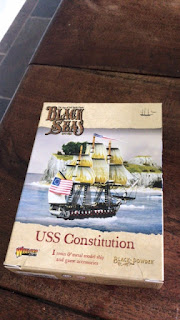 Size can matter (see below, a case of we only budgeted for six but as the Carling beer advert says it all, probably the best in the world - normal frigate [RN/French/Spanish] in the background): 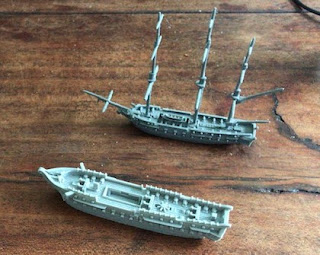 The master plan being that with the Master and Commander starter set and WI giveaway I have six brigs and four frigates, plus the USS Constitution ("old ironsides" herself - good timbers apparently). That means a basic USN fleet of two brigs and USS Constitution, a RN fleet of two brigs and a normal frigate and two brigs and a frigate for the French! Leaving two frigates in excess, whether to reinforce the French or British fleets, or make a Spaniard is the question (perhaps a wandering Russian frigate?). The only "possibly needed" expansion would be to include the bizarre fleets of the Barbary Pirates of the Mediterranean (where the teething battles of the USN were fought on the shores of Tripoli, as per the US Marines song) or the addition of a lazy fat merchantman or two. A small self-contained project, what could go possibly wrong, provided it gets off the painting tray.
Posted by Geordie an Exiled FoG at 07:00

The intention is a good one but ‘A small self-contained project, what could go possibly wrong?’ Never ends well in my experience….

When I eventually get to the age of sail I will probably make the models myself but for sure it is a great period to game, especially at a low level - frigates and smaller.

All the best and take care old chap,

Agreed but already the Barberry Pirates and Fat Merchantmen are starring me now a slippery slope .. pity me .. but then again .. no buying until I have painted the basic ships in the Starter Set