Audible Book: Admiral Jellicoe and The Crisis of the Naval War

This was a fascinating subject as Jellicoe was very much a "war hero" for his services to the Grand Fleet, leading up to and beyond Jutland, but the inability to deal with the U-Boat threat was his Achilles Heal (see below, revealing more as a detective story of what was not said, what he was prepared to say and what he was focused or overly fixated on): 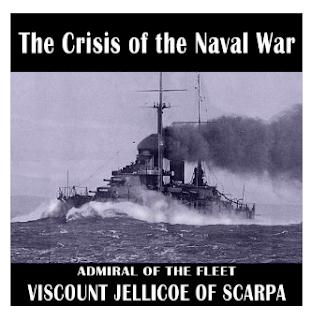 All in all I found it a turgid read, but was totally fascinated by the way the man was consumed with detail but somehow missed the most facing pungent problem facing the Allies in WWI (he considered fighting U-Boars nigh impossible). The convoy solution to the problem was mentioned in passing (and is literally the oldest trick in the naval service book) as "logistical problems were eventually solved", no hint at the political issues (understatement, ahem) with Lloyd George and no admission of credit to which the crisis was turned around. Plenty of attention to efforts and energy of ideas and systems that did not really yield the results effective convoys did. A far cry from an account of the same period from these Wikipedia pages:
https://en.wikipedia.org/wiki/Convoys_in_World_War_I
https://en.wikipedia.org/wiki/John_Jellicoe,_1st_Earl_Jellicoe
Posted by Geordie an Exiled FoG at 12:00