The Soviet player made very obvious pushes on the far right and centre of his line but almost unnoticed  there was a subtle (BTR Battalion sized) end-around left. "Bear Two's" report had not gone unnoticed or unheard, its importance had been digested, understood and the opportunity was tantalising. The Soviet General committed his fifth BTR battalion to his far left. Although slow in its move up across rough ground but its significance is huge, as it was the key to unlock the Belgian back-door and completely break the line of defence (see below, quietly the the fifth BTR moves up in company column and line): 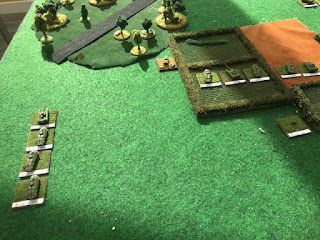 In the middle of the battlefield, what seemed to be destined for a bloody tank-v-tank slug fest, frittered away into a long range sniping duel. After a worrisome moment where the Belgian Abrams could have been caught in the open, it changed to professional calm as the M1s acquired the safety of hull down positions - which meant it was (very, very) prudent for the Soviets to retire their "gun line of tanks"; leaving both sides covering a "dead zone", one that either side could only move through at its peril. A Mexican stand-off. Suddenly this part of the battlefield was static. Note: The best Belgian unit was held in check, fixed into a defensive position. The battle would circulate around the M1s rather than them being an active part of it (see below, the T-72s prudently move back after firing a last Parthian shot): 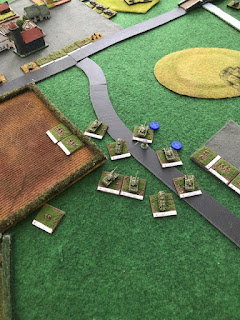 Meanwhile Soviet infantry swarm into a Belgian town sector. The Soviets have mechanically and efficiently de-bussed a whole battalion into an urban sector defended by a single company of Belgian infantry. The supporting Soviets tanks, and there is always a bunch of supporting Soviet tanks wherever you look, roam the perimeter of the urban area, like frustrated dinosaurs taking pot shots at targets of opportunity. Burning Belgian Cavalry recon M113s burn like Roman candles (see below, the Belgians were clearly caught off guard, displaced, pinned and unnerved in this isolated town quarter. A very bad start to the day - local reinforcements are called up and the Belgian Divisional Commander commits his reserve, but will it get there in time to be of use. The Russians are pressing everywhere): 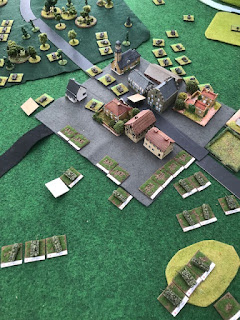 Although the town fighting is abstracted in Modern Spearhead/Battle Group Commander, you get the sense of the Belgian's dire predicament; they are outnumbered 3:1 and the enemy is bringing down indirect fire assets to bear. It is only a matter of time before the outermost town sector falls, retreat is impossible because the boulevard is covered by those damn T-72's main guns. What is more worrying is fact that the Belgian right flank is now hanging completely exposed as miscellaneous Soviet AFV's bypass the town. The only Belgian hope is another frantic rushed commitment of reserves to plug the gap (see the Soviet pressure below, one Soviet battalion in the town, another flanking left, yet another rushing right [into the larger "centre" of the main town] - the Belgian infantry defensive line is crumbling and their powerful M1 Abram tanks are hull-down in the wrong part of the battlefield so cannot help and could they even help in an urban environment?): 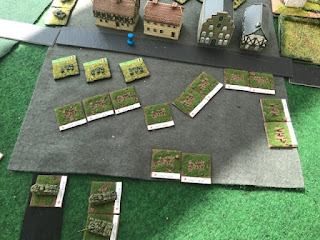 The Soviet BTR Battalion that was called up to exploit the hanging gate explodes onto the Belgian left flank. Just a single company of Belgian infantry are hunkered down on the edge of the woods, in cover holding this flank. The Belgian infantry faces off against a composite Soviet armoured infantry force, very wary of the deadly NATO AT LAWs. Recon "Bear Two" is called upon once more to advance and flush the Belgian infantry out 'by being too tempting a target' not to fire at. The Belgian infantry is hoping they can buy time for a company of AFV "Tank Hunters" to deploy and make a mess of the Soviet armour (see below, the infantry combat here is critical to the outcome of the wider battle, a time for the NATO troops to show their professionalism, hold their nerve and hold the line): 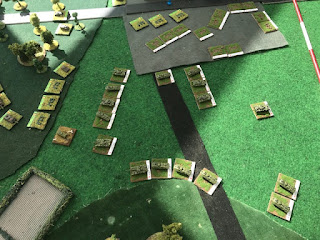 Firing is simultaneous and represents an extended firefight for over a period of fifteen or so minutes of direct and indirect fire (the blue markers on the NATO forces are player aids to assist remember who is still to fire). The advantage of defensive terrain for the Belgians is partly offset by armour and more heavy calibre weapons of the Soviet mechanised infantry and the Soviet advantage in numbers. Each stand represents a platoon of infantry or troop (4-5) vehicles, casualties represent KIA, wounded, troops temporally incapacitated and lack of cohesion. Vehicle hits represent KO, non-runners and abandoned vehicles (see below, "the dice will have it" all hangs in the balance): 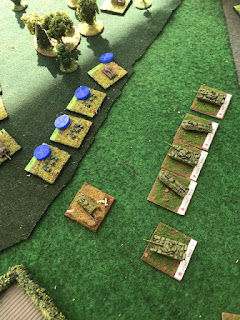 The close combat is brutal and as the guns speak the Soviets take a terrible 20% casualties but the Belgians take a horrific loss of 50% combat effectiveness. That means unless there is a miraculous intervention the Soviets will likely overrun the Belgians, especially as the Soviets too have additional troops moving up. The sounds of the Belgian armoured "Tank Hunters" moving up through the woods gives cause for some hope, but the terrain is too poor for these ersatz tanks to make quick progress (see below, the Belgians will need (or be blessed with) a massive amount of luck next turn or face a crippling blow from which they may not be able to recover): 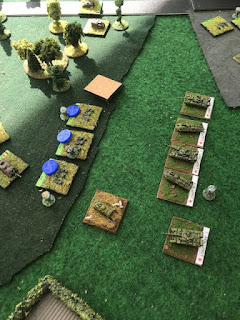 "Fate" is not kind to the underdog. The plucky Belgians are overran. They lost the initiative and the Soviets unleashed a second wave, of this time newly dismounted mechanised infantry, which broke the Belgian infantry company into pieces. What is even more worrying, the ersatz tankers who hurried up a break-neck speed are now completely without infantry support, which means the "hunters" are going to become the "hunted" in very short measure (see below, the fate of the whole battle is hanging on the outcome of this small micro-battle on such a small plot of real-estate): 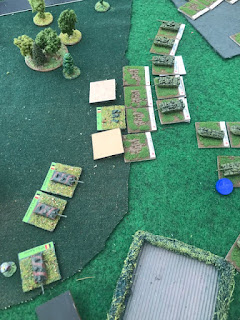 The Belgian "hunters" become trophy "hunted" by dismounted Soviet mechanised infantry, the Soviet BTR Battalion commander duly reports success back up the chain of command. The Soviet system is brutally simple - reinforce success, ignore failure, in fact punish failure by taking away assets that can be more usefully deployed elsewhere. The only black mark for the Soviets is that valiant "Bear Two" was lost by straying too close to an ersatz tanker and finding that the cannon was more than good enough for despatching a BRDM2 armoured car with. Still I am sure that the Soviet Divisional Commander has a posthumous medal in a tin box waiting for his widow (see below, the significance of this reverse it dawning on the Belgian Divisional Commander, as 'one-by-one' his units on his right flank are going "off net" unexpectedly): 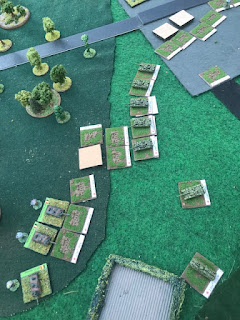 Crunch! With the last defending Belgian back stop removed the Soviet General can sense blood and the potential of a huge Divisional breakout. A radio frequency is dialled and the Regimental Tank Commander's voice is heard expectantly asking, "You have orders for me Comrade General?" "Yes Yuri. You are to lead the divisional breakthrough in Sector Four Two, there is no meaningful resistance left. The BMP Regiment will be close in support behind you. Punch through the woods to the left of the town, we have the Belgians on the ropes, show them no mercy! Speed Yuri, speed is of the essence. May the devil run with you! Overrun their headquarters and rear area!"
Posted by Geordie an Exiled FoG at 07:00

Nicely done! It is tough to swing between game mechanics, play by play, and color commentary... hats off to an entertaining brace of reports. Pity the Belgian jagpanzercanone could not find a better route to their front...my favorite piece of kit for the era.

The Belgian HQ is going to have its hands full..

Hello pancerni -
Glad you enjoyed the "read" - I have to confess a certain bias as I was the Soviet player .. I will try and get a transcript from teh Belgian Commander to post as an objective counterpoint!
Best Wishes
Mark