I was lucky enough to participate in a remote wargame with a group of friends from Sheffield, recreating the German response to the Arnhem landing of the 1st British Paratroop Division (with some Polish friends). Hosted over two days, it was very instructive and fun. A hex based game board, but I seem to have been too wrapped up in the games (which to my mind is a sign of a very good game) to take screen-shots. All that I could find was the "operational map" I was using as a crib to keep track of proceedings (see below, I was part of the ad-hoc German forces that attacked from the North East and drove down the right hand side of the board): 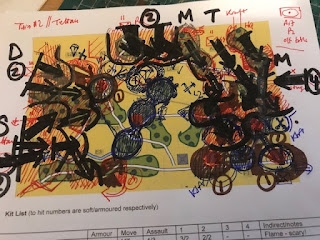 Another German Kampf group (though notably lacking in armour) attacked from the West (left hand side of the map).. The result was a rather bloody draw, ahistorical in the positioning of the "Para Pocket" but historical in the sense that they were not going to be able to punch through to Arnhem and link up with Frost.
Note: I will add additional photos if they turn up ;)
Posted by Geordie an Exiled FoG at 00:40

Glad you enjoyed it Mark, I think your operational map captures the intensity of the fighting rather well! I'm sure the "Wolfheze Pocket" will go down in history as the last stand of 1st Airborne Div.