The Allied army found to its dismay that artillery pieces of the time could be quite temperamental, as the British Mortar exploded killing its crew! This was also a backward step with respect to the reduction and destruction of Ramillies. The Allies were looking forward to the amusing "catch fire roll" to the town that now will never come (see below, things going bang in a spectacular fashion): 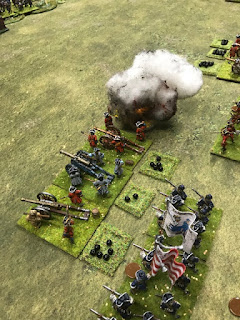 The long and the tall of it. The infantry lines are slowly pacing towards each other from the top of the table down. There seems to be a "long hard staring phase" going on in the middle of the table with infantry eyeing each up warily. Meanwhile the "blocks" of cavalry have been swept from the table. What remains of the original force is spread out and scattered, the Allies having the better of the situation (see below, still a very impressive table): 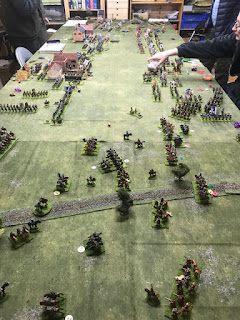 Ramillies has suffered a 'part reduction' in its integrity (see below, it still counts as hard cover with any hit in effect having a "saving throw" to see if it really is a casualty): 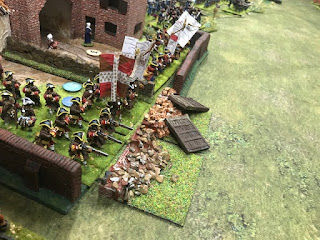 On the cavalry wing the French attack on the fortified hamlet has been abandoned. Remnants of the many cavalry brigades can be seen in the distance wandering around the field (see below, the fight for the hamlet seems futile by the French as it tied down valuable cavalry in a dismounted ground role against a 'fortified' regular infantry brigade, a battle they were never going to win in hindsight): 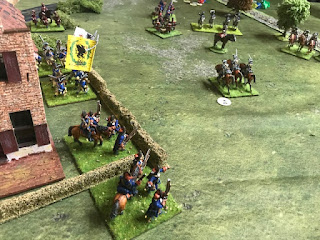 Across the rest of the field the stragglers and survivors of the first and second waves of  cavalry battles ponder their fate (see below, this disorganised Allied Dutch cavalry [bottom middle] surmises itself unlucky to be the target of a "walk rather than charge to combat" with a formed French cavalry brigade [right middle - partially off camera]): 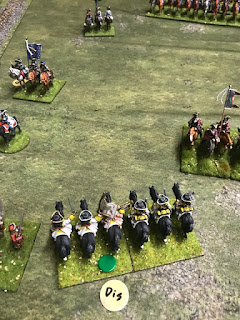 Meanwhile an over successful French cavalry brigade on the Allied baseline considers its fate under a retire order (see below, the options are paradoxical, the retire from threat also means you cannot go closer to a known enemy): 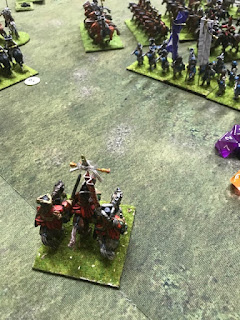 After (somewhat heatedly - the Allies not wanting to be attacked in the rear by a retiring enemy) discussing the options it seems fair to move them "off table" (see below, the horse marker denoting the place they exited, there is a double-six roll required for them to successfully return): 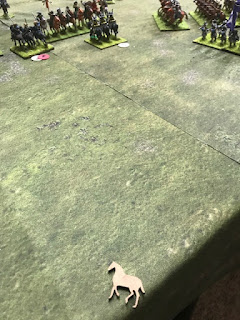 Meanwhile Allied cavalry reinforcements are making a "tactical" impression on the French commanders (C-in-C [he thinks that he has sent too little and the brigade commanders - how do we fight this?]) now (see below, six brigades of fresh Allied Cavalry arrive making the French look a bit queasy): 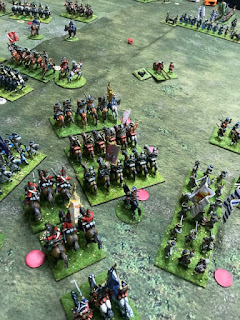 Meanwhile the last unit of Dutch Guard are caught after successfully charging the French dismounted Dragoons, by my most hated unit in the French Army, the "French Space Marine" Hussars who like Schrodinger's Cat can exist in a dense charge formation and dispersed electron cloud at the same time (see below, I fear this is the last I will see of my valiant Dutch Guard [sniff]): 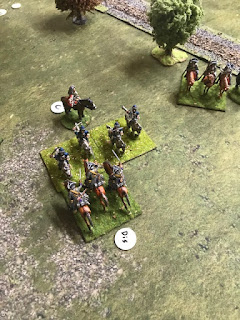 But the fickle blade of success too cuts into the French Army, Allied mounted Dragoon catch a disorganised, battered French line cavalry brigade in most unfavourable [for the French] circumstances (see below, this is possibly the best use of mounted Dragoons, committing them to sweeping up battered enemy Line Brigades of cavalry - thus keeping our own still fresh): 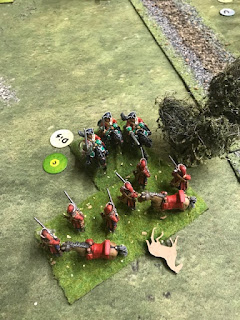 A second unit of Allied mounted Dragoons finds a disorganised, weary and wasted unit of French Line Cavalry (see below, an evil gleeful look of delight passes across the Allied wing commanders - rubbing their hands in glee): 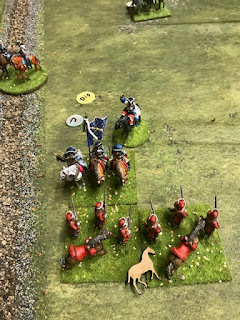 Meanwhile a bullet dodged, as through French command confusion the disorganised Allied cavalry are not charged by their closest adversaries, but instead by another unit too far away to hit them. This allows them to retire to a relative safe distance [far away from the approaching deadly Bavarian Curassiers]. A brief moment of silence by the Allied commanders allows verbal French command recriminations passed down the chain-of-command (courtiers all the while making notes for King Louis). This is an Allied unit that will live to fight on another turn after reforming (see below, perhaps the Dutch Allied uniforms looked too French): 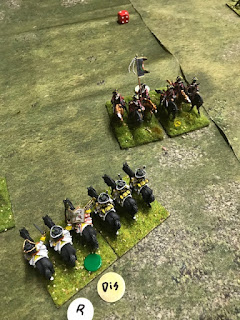 Alas, nothing so lucky for this Allied cavalry unit, that first escaped the French pursuit, had the gall to "rally itself" now only to be charged (albeit in disorder and at less than a trot) again (see below, with a bit of luck it could take a base off the Frenchman): 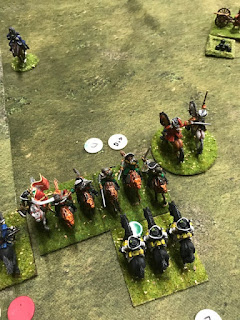 The infantry in this matter still stand a long way off each other - gesticulating (see below, the lone gun to the left is a "galloper" in support of the cavalry action off camera to the left): 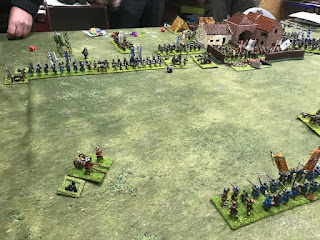 The expectation is that the will be some short and brutal cavalry combats next turn!
Posted by Geordie an Exiled FoG at 15:57

This looks fantastic I'm going to have to rewind to the first post and follow it through!

Glad you are enjoying it David
It is a pleasure to have you watching the show!