Stockton Battleground Wargames Show 2021
Cinderella you shall go to the "ball" (well it is actually a "wargames show"). Myself and fellow wargamer Ian took the relatively recently released PSC "Battle of Britain" Game (which older Grognards would recognise as a revised [and I would say much improved] version of the game from the earlier Airfix 1980/90's (?)edition of the "Battle of Britain" board game) off to the show to play it "double blind". This meant a partition board between the players and a slight revision to the rules. Rather than relying on the random shuffle of the deck of mission cards to provide intrigue and chance - the German would be allowed to choose or rather "determine" his targets and use an appropriate force composition - but he [as in "me" on the day] was playing fair and hitting targets in historical order (radar, airfields and then cities). The forces were selected to player preferences (although the Germans followed the rule of thumb that 50% Fighter and 50% Bomber in his formations - with at least one Ju87 Stuka and Me 110 squadron (until they ran out)). The RAF likewise controlled their force composition, naturally holding the Blenheims, Defiants and Gladiators to the "last line of defence". The German was playing with Fog of War - the RAF player being a semi-plumpire by virtue of handling all combat - the Luftwaffe player passing his cards over the wall to do "combat" and generally receiving "fewer" back. It worked really well (IMHO), as the Luftwaffe was deprived of th eobvious board game "tells" of how well (or bad) he was actually doing, so he had to do a bit of guesswork and bad guesswork often leads to bad mistakes.
The video of the Stockton Battleground 2021 event is here, with at 9:20 is a quick fly-by of the Battle of Britain Game:
https://www.youtube.com/watch?v=BEf3XkKugI8
Right at the start of the action and the "view" from the German side of the Battle of Britain board (see below, a lot of Red bombing missions to perform, with the Luftwaffe intent on eating them up, by nibbling from the south coast upwards in order of: Radar - Airfield - Cities): 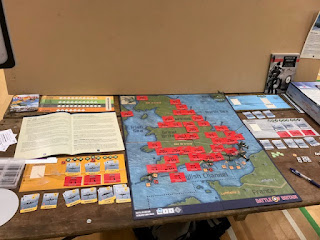 Kanalkamf and the bomber formations are 'mysteriously' intercepted and bounced by formations of RAF fighters (see below, in the game the RAF player tries to "intercept" rather than "dogfight" his German opponent wherever possible, by this tactic he stands a good chance of getting to those juicy bombers without having to tangle with those nasty Me 109s): 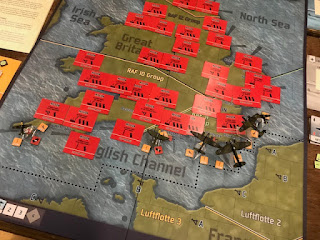 The first wave returns after a partially successful mission strike. According to Luftwaffe intelligence estimates of 50% of the RAF radar stations have been destroyed [explousion markers denoting dead radar stations, or so the Luftwaffe player thinks]. The second mission wave with be sent to take out the remaining stations of the Home Radar Chain Defence Network (see below, a cunning trick of the game is that the German player cannot return to a "completed mission", so to his utter amazement he keeps getting intercepted by the RAF - annoying "detected" markers appearing on his fighter/bomber formations as if the destroyed radar stations and airfields had somehow been repaired [something that didn't happen in Poland and France]): 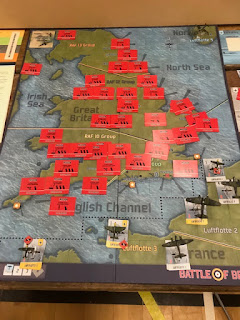 With the radar chain taken out it is now time to move onto the RAF airfields (see below, the RAF radar stations on the coast are burning now so the historic name of Tangmere comes to the top of the German bombing list, this is going to be the "crux of the battle" RAF fighters defending their home turf, a bit of a "sticky wicket" as they say in cricket): 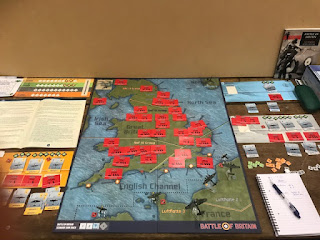 The Luftwaffe target list is slowly creeping up the board. Despite the (very) heavy losses optimistic reports are being sent to Goering about significant RAF losses and numerous infrastructure targets totally destroyed. The RAF airfields are now to be put out of commission and as a final insult Luftflotte 5 will attack from Norway (we [the German player] expect only to meet the decrepit Gloster Gladiators and outclassed Blenheims). This is now the "tussle of eagles" (see below, the south coast is burning, one more push and the English surely will be on their knees): 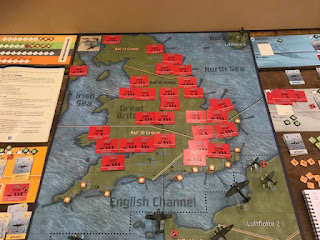 Alas, the Englanders have other plans. Luftflotte 5 reports disastrous losses. They found Spitfires and Hurricanes waiting for them - the converted long distanced Me 110s stripped of the rear gunners for extra fuel tanks could not protect the bombers. There losses were irreplaceable, tLuftflotte 5 are now a spent force. Meanwhile the fighting over the southern English coast is simply ferocious. "How are the Tommies still intercepting us?" A final wave of fury is unleashed on 10 and 11 Groups airfields, the Port of London and naval towns of Portsmouth and Southampton are also targeted. Another attempt to take out Tangmire is launched. The destruction is wanton, but the Luftwaffe is down to its bare bones of bomber formations, the crews are tired and dispirited. The London Docks blaze savagely and are totally destroyed in game terms, Portsmouth and Southampton are damaged, RAF airfields smoulder but somehow 11 Group, Keith Parkes boys, rise like a phoenix rises from the ashes, a punch-drunk boxer raising himself defiantly from the canvas one more time and slugs out at the arrogant Aryan. He lands a  body blow, a body blow, another body blow and then solid punch to the jaw. The airwaves are full of Polish chatter, Heinkels fall from the skies and dogfights mesmerise Londoners. Luftwaffe suffer terribly (see below, their bombs land and buildings fall, Luftwaffe pilots confidently tell their superiors of the destruction reeked.If this is true then is it time for Sealion? Tomorrow will tell): 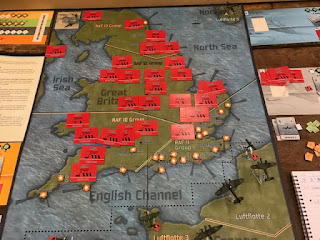 The RAF is ready and waiting in the morrow, in far better shape than the Germans think. Yes, the Germans will come but they will see the RAF still in the skies, not down the their last fifty Spitfires as Goering boasted. No, it is not the time for operation Sealion, disperse the invasion barges, send the infantry to the East ready for Russia. More bombing missions will follow, different towns will burn but the RAF has not been cracked or broken (see below, German intelligence cannot simply understand how the radars, how supplementary airfields have been used so effectively and how pilots are trained so quickly to replenish British losses. It is "the few" who stopped them by their persistence and doggedness "To keep buggering on" as Churchill said (see below, although seriously damaged the RAF are not down and out. 10 Group are reeling more than 11 Group, 12 Group supporting them on the South East coast. The constant  problem for the Luftwaffe player is that they do not known what to try and hit next - it really played well as a double blind game, particularly as the German had to "estimate" rather than know the RAF losses): 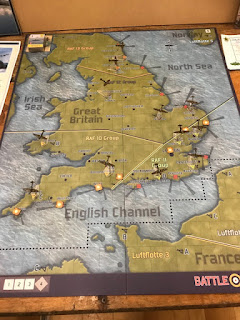 Honourably mentioned in dispatches, the "other few", spare a thought for the "other" British fighters of the Battle of Britain. Along with the Spitfire and the Hurricane there were a fews RAF fighter squadrons who flew twin engine Bristol Blenheim Fighters, the twin seater Boulton Paul Defiant (a rear facing turret but no forward firing guns) and even the famous Gloster Gladiator biplane (see below, painted up in 1/300 from the PSC expansion pack): 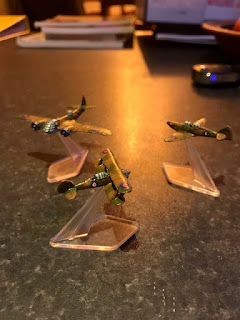 Other spoils from the Battleground show. Next year we plan to do the Battle of Gazala, so these 10mm Pendrakon Italian CV33s, British 8th Army Infantry and A13 Cruiser tanks (maybe not, too early in teh Desert War but I have a soft spot for them) are but the start of a long term painting project (see below, a small lead mountain to attack in the winter months): 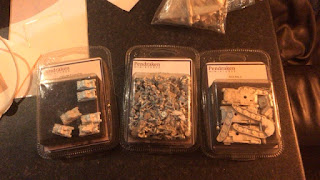 These will reinforce my previously purchased and now painted Pendrakon Italians. I wa hoping to pick up the tiny Italian L6s, but alas that will have to come in a later postal order.
Footnote: Apologies as it was rude of me not to thank the many members of the wargaming public who popped by and helped with the game (drawing random cards from the Luftwaffe Player's hand (as in me)) plus engaged in fascinating conversation, passing on fascinating Battle of Britain comments. I learnt a lot .. thankyou!
Posted by Geordie an Exiled FoG at 23:12

Great stuff Mark, that looks like an excellent rendering of the Battle of Britain and glad it went well.

Looking forward to your Gazala game. An interesting battle which I ran using Panzergruppe some years ago, although I don't recall any A13s, just Crusaders, Honeys and Grants.

Collecting an Italian army was the only time I dabbled with WW2. I opted for Flames of War and really enjoyed painting the figures and vehicles. The early desert war seemed an interesting period although my dad may have had something to say about it. I hoped you enjoyed the show, it was great to see so many people again.

Hello Matt, I must admit I was totally engrossed in the Battle of Britain game on the day to take much notice of anything else going on, but the after the event pictures of your game looked fantastic. I managed but two sweeps around a couple of trade stands all day with some quick purchases.

Hello Martin, quite right with the A13's they just appeal to my clanky tank era fetish ;)

Cheers IndependantWargamesGroup, it was a real treat to be out and about. I sense the urge to paint the Italians comes from them getting a much maligned bad press, favouring the underdog and novelty factor (as per the A13 clanky tanks) ;)