I have been quiet on the blog posting front but I have been pottering along quietly in the background, with of all things the "Vietnam era", courtesy of an Airfix 1/72 scale Sheridan (see below, now this thing had been assembled for ages [a decade?] and primed black but I had not been given a reason for it's final coat of paint): 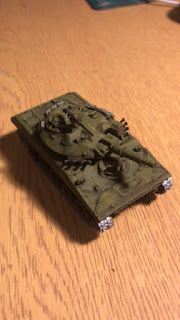 So instead of Cold War era Europe paint job it swings across to the jungles of South East Asia instead. I know from photos an ACav style gun shield and turret topped ring of sandbags, plus a few on the front are scheduled modelling additions. Heavily armoured it was not, so the crews improvised additional measures.
Posted by Geordie an Exiled FoG at 23:25