Handed back to me by my errant son, the four Sergeants-At-Arms were made, finally armed in the end with short spears (see below): 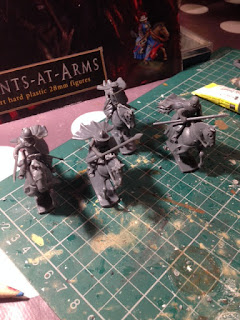 I had toyed briefly with the thought of geting four metal mounted handgunner figures from Redoubt Enterprises (and there is still the chance that I may) but looking at these I am hoping to fit them into a Renaissance army .. but looking at the army lists they seem more Crusades. Am I branching out (again) should realy just paint them first and then decide ;)

Posted by Geordie an Exiled FoG at 22:17