After all this work on micro (1/3000) scale stuff I had the urge to put together some 28mm plastics (aka the "big stuff" that I can see better - 15mm scare me these days) together and chose the FireForge Games Sergeant-At-Arms (mounted) as it was on top of the "stack" (a "last-in" but "first-out" of data structure). Nice kit and I have been waiting to do these for some time. The box is a direct copy of the Mounted Sergeants but it has a 'sprue' of six crossbowmen which was the deal breaker as it will be ideal to give me an extra Impetus stand (or two, if I hide a sword armed chappie in the midst of the block of four and get eight from six .. a cunning plan) for my Maximilian 'Italian Wars' Renaissance Army (see below, notice how there are only two sprues of bodie parts to make up eight men, strange at first I thought I was going mad as I thought I had counted twelve, I then thought it must have been a packing error. I then found out I was the victim of a childish prank by my eldest for pulling him out of PS4-land making him see natural sunlight - silly as he obviously forgot his birthday is coming up soon .. looks like the Physics or French text book it is then! So all is well I have twelve to play with): 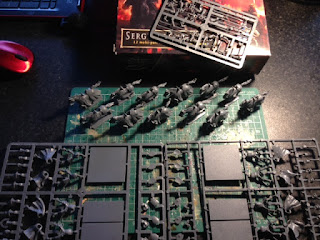 So the horses went together sweetly, very reminiscent (in a good way) of Games Workshop standard troop types that will lend themselves well to good brush stroke painting, The mounted crossbowmen were cool to put together although I cannot vouch for the poses I chose given the horses were all going at the gallop. The boys might in reality "fall off" in real life (see below, there are eight here but now that I have been reunited with the missing 'body sprue' I have another four axe, sword, spear and mace ones to make): 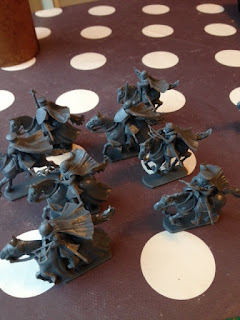 They are a good but and together with the Mounted Sergeants (FireForge Games .. still to assemble), the Men-At-Arms (Perry's Miniatures .. still to assemble) and the Teutonic Knights (FireForge Games .. assembled but still to paint) I have more horse than I can shake a stick at (or should that be 'pike at'). I do still have the mad urge to get the Perry, Light Renaissance Horse too, but that is because I am getting a little "28mm mad" seeing everything that comes as plastic in a box circa £20 as a bargain!
Posted by Geordie an Exiled FoG at 07:00

Always liked the FireForge stuff- never bought any, mind - but could never understand why they never did any Saracens to face off against all those Crusaders...

I think they do them but alas in teh more expensive old fashioned "metal" or rather "resin" (see below):
http://www.fireforge-games.com/webstore/middle-age/armies-of-islam

Much more expensive to slap an army together in :(