I did a playground style "book" for "lead" trade with a fellow wargamer whereby I gained a 1/3000 posse of Navwar US Moderns (and other US Moderns as of last century). In the first instance I have a powerful US CVN battle group. I  may add another SSN 688 attack sub and DG Burke at some point in the future to make it an "Uber Group but for now it suffices (see below, the Nimitz is "huge" more Sci-Fi than real world. Even the "Fleet Oiler" is a beast): 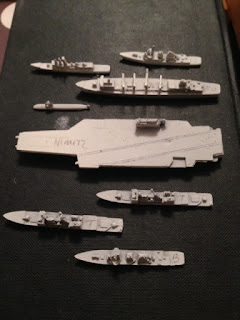 "As strange to the eye" is the modified Iowa (Sea Harrier capable) projected conversion in the second batch. The other stuff has transitioned from WWII "guns" to modern "missiles" (see below, the carrier [CV] is the USS Coral Sea of the famed Midway class that was too late for WWII but served well into the late twentieth century through various upgrades (see below): 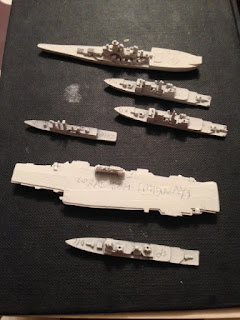 Last but not least is the "aircraft carrier loo-a-likes" that are US Marine Corp amphibian support ships (see below): 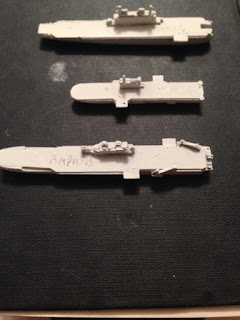 All ready for "a brave new twenty first" century world and teh changing world order. Watch this space!
Posted by Geordie an Exiled FoG at 21:30

Looking good Geordie, not something I'd previously considered, I but the appeal is there.

The relative small outlay involved too makes it interesting ;)

Still cannot get over the size of the Nimitz