Blood Red Skies: Battle of Britain (2 of 3) The Grist to Battle

Cunningly Von Ken's boys have sneaked (a complementary term) into a rear position behind teh Spitfires for tactical advantage - although out of gun range for the moment (see below, it is going to be a testing time for the "rookie" RAF Spitfire Pilot Commander, the dashing young Ian fresh from his exploits with Maisie the  barmaid): 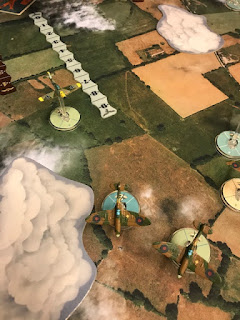 Meanwhile the Me110s have made a desperate dash at the Hurricanes, trying to get their deadly 20mm frontal cannons into play. However the crafty "Dapper Dave" has learnt a thing or two from his experience fighting the Luftwaffe in France and is not going to fall for a frontal exchange (see below, the pilots trade curses and "skill tests" trying to out manoeuvre their opponents into disadvantaged positions - with mixed success): 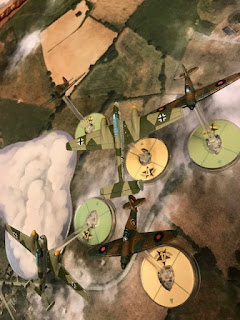 Note: The upright position of the plane on the stand denotes it is in an "advantaged" position - while you have an advantage you cannot be shot at (which is really good believe me), therefore there is a lot of positioning and skill tests (a pilot action is used to make the other pilot 'make a skill test' or lose one grade of position [advantage/neutral/disadvantage - state change left to right] when you get within mine inches of their plane). The easiest way to be put in disadvantage is by letting an enemy in within gun range in your rear arc. You are very vulnerable to being shot down while at disadvantage - so the number one rule is to maintain an advantaged position at all costs (see below, multiple skill tests start to wear down the Me110s from advantaged positions, starting with my "wingman"): 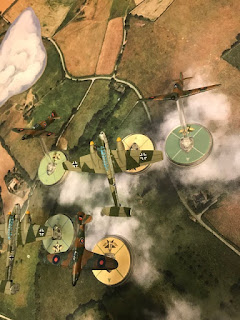 I find out to my cost Me110's are poor chasers unless you can "zoom and boom" with a "great dive" ability - which gets you a boost of extra movement (see below, my incompetence lets this Hurricane escape): 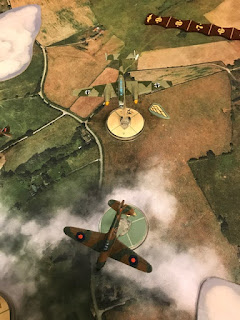 It is satisfying when you manage to to get a bucket full of sixes (German Crosses on the Luftwaffe dice) but you can only ever get "one hit" - a second cross ups that to a critical (which makes it harder to save) but you do not automatically inflict damage. Things are handled rather abstractly, with the attacked plane allowed to make a saving throw. If this is failed when the plane is at a disadvantage, the plane is shot down, otherwise you "get a boom chit" which accumulates as fatigue and loss of morale. Eventually the accumulation of "boom chits" breaks the squadrons "will to fight" and they disengage. It's a very nice concept and game mechanic - other rules systems encourage a last man standing fight to the death (see below, it cannot get much better for the Germans, but even such skewed stats rolls do not produce overly devastating effects, but rather secure a good outcome): 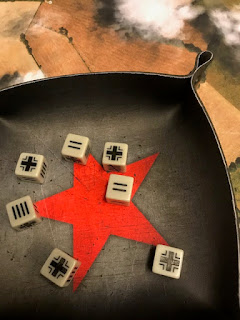 One advantage of having a two-engined plane is that you effectively get two lives. The first life loses one engine (which loses some speed) and kills the rear gunner - which means you cannot get the Parthian shot at the Hurricane in your rear arc anymore, the second sees you tumble out of the skies like a flaming meteor (see below, disadvantaged and failed my skill test means my rear gunner and an engine is lost): 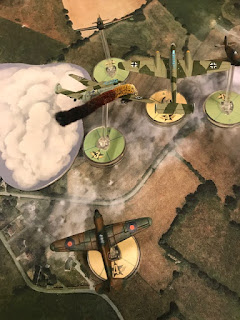 The Me109s are really taking it to the Spitfires, no losses but lots of "boom chits" acquired. The Spitfires tight turns give them plenty of dice to make their saving throws, which turns a rear arc shot into deflection shot. From auto kill to a morale "boom chit". At least four Spitfire pilots owed their lives to this ability! The Hurricanes meanwhile are certainly taking to Baron Mark's flight of "elite" Destroyers!
Posted by Geordie an Exiled FoG at 07:00

I cant wait for part 3

Why be that Von Renko?