Fun with Cardboard and Containers

The first bit of fun comes with a spare sheet of thick card and a pair of scissors; coming off the back of the Arras game I did a stock take of the 'stands still left to be done' and I provisioned sufficient for all my early war 1/200 to get based (see below, one of those jobs that is harder to start than to do once started): 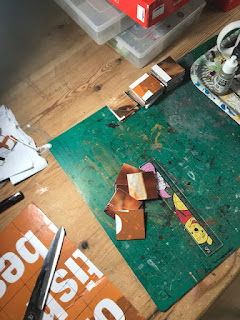 The next bit of organisational fun was seeing some cheap plastic boxes perfect for board game counters storage in Home Bargains (apologies to international viewers here not from the UK) at the princely sum of £1.29 for four (see below, checking them out for size with the "printed out" early war Panzer Leader/Panzer Blitz - BEF counters, nice job!): 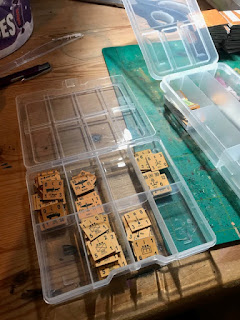 All Panzer Blitz bases were covered with four of these beauties (see below, all counters neatly tucked away into their box by nationality and function): 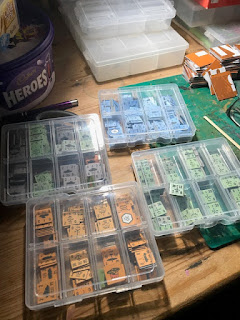 I can see myself going through some old favourites and de-bagging and boxing up the counters or by a combination of both bags and boxes have my board game collection in "ready to play" mode.
Posted by Geordie an Exiled FoG at 07:00

They work well, so hard to get cheap containers here in France, next trip to the UK I will be stocking up!

I must admit that I think a tidy mind is a sick mind but then again I spend lots on boxes to store my toys so..........