Phase II: The attack is going in hard on the German right flank. "Bags of smoke and flank left" as I think the British Army expression goes, plus a huge concentration of the British PBI force, three infantry companies attacking to one defending certainly helps. 75% of the British battalion are hitting at this point here .. ouch .. (see below, top of photo, another close combat goes in against the middle German platoon): 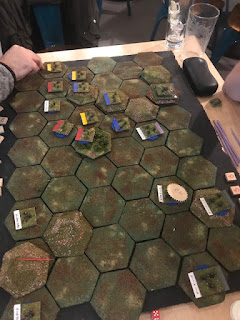 The advance is merciless and methodical ... although momentarily stalled. FireMove does not always produce fluid flowing play as the defenders can with the roll of the dice can produce an unexpected roadblock (see below, the heavy British pressure is held for at least one more turn and time is a factor in this game as there is an implicit fatigue and exhaustion point): Note how the British green company has been reduced under the withering fire of the "other" German company and logistics "firing out one platoon". Attacking entrenched infantry at 1:1 of odds, even with two HMG Platoons, does not bode well for the attacker. Meanwhile at the north/top end of the photograph an infantry assault clears another German platoon from table (see below, that is 2VPs for the British and 2VPs for the German in infantry KIA): 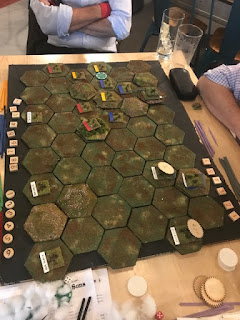 The British infantry advance on towards the German baseline, pressing on, heeding the ancient axiom of "not fighting where you do not have to". One consequence of this headlong rush forwards is the awful intermingling of platoons from different British companies which hinders both suppressive supporting fire and close assault execution. Different coloured companies cannot fire in mutual support or perform mutual assaults together, although a "white" Vickers HMG could - subtle but effective rules (see below, the German baseline is a feast of additional or rather potential VP that are up for grabs): 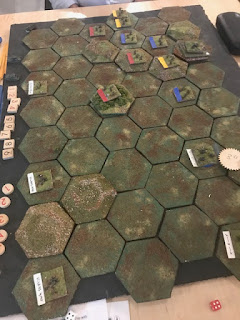 A line of VP markers are placed along the German baseline that are "up for grabs" - which serves to emphasise the plight of the German defenders. The German turn is rather quick as the British have done a good job in suppressing them so the only action left open to then is to rally and recover - becoming fresh again (see below, please note the third white platoon on the British baseline is the British scout stand which has chosen to retire, its job): 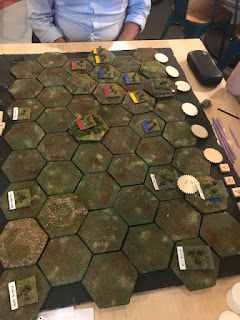 For who the dice rolls! In this case a terrible "one", for the Germans. No hits are automatic so a "one" can mean a failure at the most critical of times (see below, I think the roll was probably defensive fire or a German close assault that went horribly wrong, with the action probably fat away from this safe German platoon): 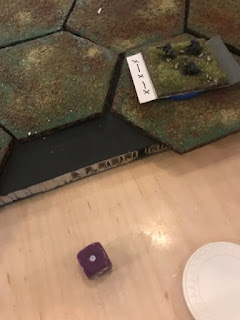 British Turn (Reinforcement Call - burning 3VPs to bring on some tanks, but risking them [minus 1 VP for any lost] on the assumption in the time remaining they can be driven off the board from 2VPs each): With an opening created and a safe zone cleared by the British Infantry Battalion asks for (as yet unallocated by Brigade) armour support to exploit this opportunity. A favourable dice roll - possibly influenced by imbibed strong beer, sees two |75mm Sherman tanks and a 17 pounder Firefly Sherman appear ominously on the British baseline. Note, also the use of black painted cocktail sticks that denote movement - so a unit cannot fire if it has a black stick on, this was a very useful aide memoire (see below, this really looks like curtains for the German right flank, time perhaps for the German to ask for armour support (?) as he sees this threat develop - see how those movement markers imply the final German platoon in the north is about to be surrounded.): 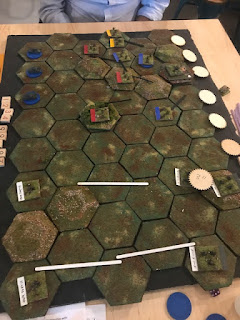 The last German platoon in the north is becoming an awkward embarrassment to the British. With clock ticking and the British player burning VPs to bring on his armour "en masse". This turn seems to be stetting the German player up for the kill next turn (see below, the 3" mortar and Vickers HMG's do not have to "pay" the logistic tax, so the southern half of the battlefield seems to be semi-permanently supressed to the German player): 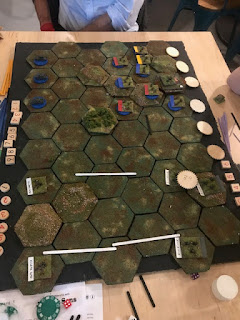 Discretion can sometimes be the better part of valour, true the German player could possible make a brutal close assault on an adjacent British platoon, but in all probability he would be pinned and lost on following turns (see below, instead he elects to retire while he s able to and also in so doing removes a potential VP from the British coffers): 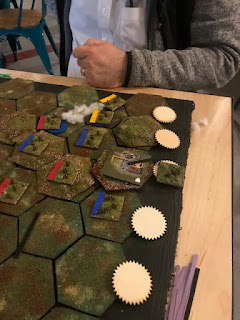 Seen from the German perspective the final brake out with an intact British armoured formation being released to wreck havoc in the German rear area, on reflection is a rather depressing viewpoint (see below, all the British armour will have exited in two turns or be in place to try and shoot up his Stug III if he chose to bring it on - which would be on a friendly German baseline hex, not adjacent to an enemy unit. It cannot fire on the turn of its entry so would receive incoming fire. The danger is deemed too great, the gain is too little and the opportunity passed [Note: The German armour could be asked for on the turn after British armour was spotted]): 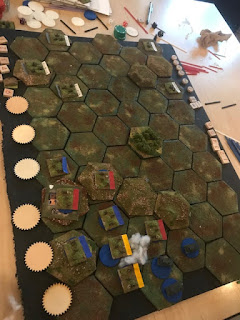 Breakout as seen from the British side (see below, four VPs from the German Baseline hexes and six VPs for the British armour exiting off table make a swing of ten VPs which is a crushing victory - a token defending British infantry force in the newly captured farm house [which offers protection as good as entrenchments] can hold off any German counter attack as they would have to leave the protection of their entrenched positions): 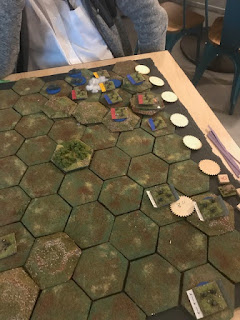 Called convincingly for the British. Well played, a gentleman's ending to a fittingly good game between friends, and we are the last ones in the house to boot  (see below, it is not a good sign when your opponent has to move from his side of the table to your right flank to move his troops along your baseline): 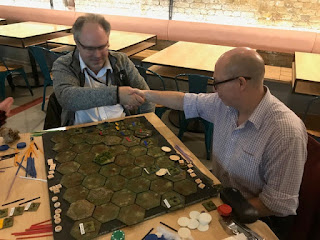 A good end to a great night old in Old London Town! That was a good run out for FireMove and some extended rules, once again thanks goes to teh Exiles for being such great sports.
Posted by Geordie an Exiled FoG at 07:00

Good stuff, interesting that you also added armour to the basic game! Just one thing though, I tho ght the MGs and mortars did use up ammo, for the British at any rate. In fact that was one of the player moans : why should the mortar fire end removing friendly platoons due to low ammo? For my extended version I ended up tracking ammo by company and support platoon.

Yes, that was an amendment that Phil put into the rules post "gone to print". The HMG and Mortar were presumed being stocked up with ammo by the 13th Bren Carrier platoon absent from the OoB. After all teh HMG cannot move from the baseline. We assumed the ammo logistics to be specifically rifle ammo!

Note: The armour was not a completed addition system extension but more of a scenario specific bi[you could no have "lead" with the armour and expect a tank v tank action but more of a bit of spice at the end (no Tigers here) that would be a completely different game]

Great looking game. It is one I'd like to try at some point. Guess I need to make up my own set... am pretty sure I could improvise something....

Yes you could literally draw on a large piece of card, an off-set square grid to go "ugly hexes", use post-it notes or sticky labels for terrain and poker chits for playing pieces, or do as I did and get some toys on the table. I am a "form" as well as "function2 sort of person, so where possible I like to get model railway style 3D terrain representation (and pretty painting toy soldiers) on table .. I feel it lifts it up and makes the players engage with it more ;)