In preparation for my Beda Fomm game Martin from the Sheffield "Zoom" wargame kindly group laid on an Operation Compass battle for Tamar West, a little known quadrant of death that was an Italian fortified strong point in 1940 that Wavell's Western Desert Force had to take down. Appearing out of cover of a convenient desert sandstorm [for the British] were two columns of lorry borne British infantry and the sound of clanky tanks of Matildas [still off table in the photograph below] approaching from the the brown track, bottom left in the photograph. One British column of infantry drove straight up to the base of the Italian camp, dismounted and close assaulted the Italian across the barbed wire - heroic stuff (see below, a fortified patch of three hexes in the centre of the set-up and the road leading off to the right were the British objectives - a tight task to do in only nine turns): 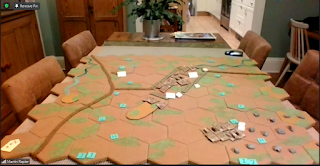 The Matilda's make good use of the road but the battle always seemed to be in the next hex away. Meanwhile both British columns of infantry are getting stuck into the Italians, although the latter column got shot up on the way in while riding on the trucks. Time was expedient so the risk was well taken IMHO (see below, British trucks are seen wisely getting out of the way of this "fighting stuff"): 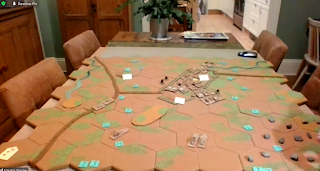 The Matildas make it to gates of the camp to find it already in British hands (again the battle is always one hex away) as the British infantry relentlessly punch over the hills trading blow-for-blow with the Italian infantry and Italian Gunners, who die by their guns (see below, only turn three and the British are half way over the first objective - it is a fast pace but it has to be for the British to win in nine-ten game turns): 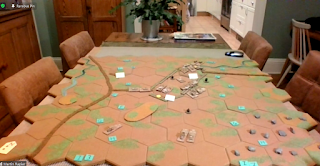 Consternation as the Matildas have to go off road (they are very slow) but the inside of the camp is being pummelled by Italian Artillery (coming in danger close) and already over-stacked with assaulting British Infantry (see below, a target rich environment with little cover): 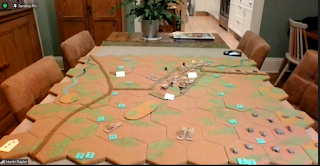 The final fort hex is assaulted and the fort of Tamar West is now in British hands with Italian infantry trying to regroup in a wadi outside, despite being ineffectually machine gunned from the light Besa MG's of the British Matildas - at least they are close enough to shoot (see below, the Italian infantry has to be eradicated before the British move on to secure the exit - but what is this, Italian reinforcements appear on the very table edge hex the British are after): 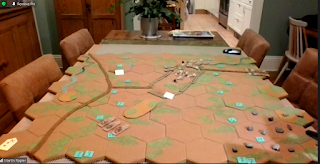 The regrouping Italian infantry are caught by a storm of steel as the British Infantry charge out of the newly captures fort and destroy them entirely before they can fully regroup. The British pay a hard butchers bill, now down to two companies from an original force of two battalions (see below, the Matildas advance into the fort with intention of driving on the the exit "through" the Italian L3 MG carrier armour): 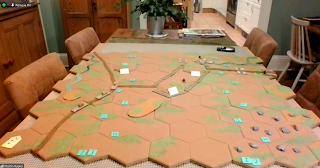 The bravery of the British infantry literally  know no bounds as they pin the Italian L3 MG carriers in place, dropping 25 pounders in amongst the antiquated armour causing mayhem (see below, the game will rest on the sequence of randomised activation and and whether the Matildas can travel three hexes in two turns): 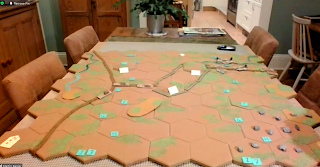 The L3 MG's take away another British Rifle Company away but the combined effects of the British artillery (including I am told some antiquated museum piece WWI era sixty pounders appearing in the British Order of Battle) and Matildas have quiet ruined them as a fighting force (see below, the Matlidas are two hexes away with the very last turn to come): 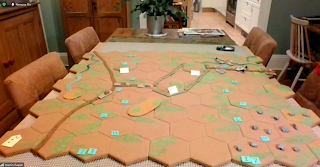 Turn 9 and the "victory exit hex" falls into British hands, for a narrow win - with the British artillery induced (and Italian failed) morale check, along with the menacing sight of the untouched advancing British Matildas just being too much for the last Italian infantry unit. You can understand it, bereft of AT guns [and therefore subject to "tank fright" in the rules], under nasty artillery fire and to crown it all out in the open - but they have made the British have paid a very heavy price in infantry for Tamar West (see below, the only surviving Italian unit being the battered L3's lurking two hexes away from the road and trying to rally): 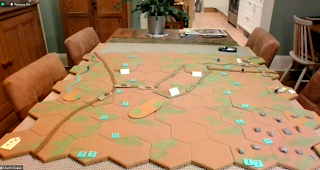 A very historical outcome, though close run thing, with the Matildas next tasked to trundle on to guess what? Yes, the next Italian strong point, presumably picking up some fresh infantry on the way.
Posted by Geordie an Exiled FoG at 23:58

I'm glad you enjoyed it Mark, and it is always interesting to see things from the players pov. I'm amazed you can see what is going on at all! I'll do a more close up game report in due course.

Yes, the Matildas are quite slow, but managed to get all the way from the bottom left corner and up to the top right. Very impressive.

It was epic Martin. You don't often get to ride around in the desert in a Matilda without the fear of an 88mm saying hello ;)