I was doing a lot of rummaging around in the loft and garage and came across my boxes of zip-lock games from XTR Corporation, aka Command Magazine. In their heyday they rivalled and IMHO surpasses Strategy and Tactics. I started looking through them in more detail and ruminating. I (for some reason now lost to me) had separated the magazines from the games in different boxes. Hence I naturally spent a whole afternoon "pairing" them back up. Alas there was a missing copy. I remember having a copy of issue # 34 "Death and Destruction/Gazala" but I had that sinking feeling Ihad leant it out (and although I later asked the person in question) it was never returned - I distinctly remember the Western Desert, Rommel and Gazala being the reason for the request. I had hoped that I had merely misplaced it but alas, by the end of the evening I could see no other place it could be (the "box search" had extended to 'all other corners' of the house. Sharing the burden with my friends is the closing sessions of Ramillies, they commiserated and advised wargames shows and online searches .. so I Googled and end up visiting SecondChanceGames (see below, and came up trumps with Issue#34): 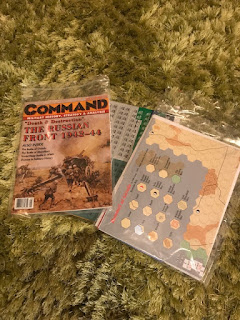 Making a "good" out of a bad I also spotted what I think is arguably Command Magazine's best game "Alexandros" from Issue #10 (it runs neck and neck with Issue #14 Midway [double blind game of the classic battle]). This was one Command Magazine missing from my collection, although I had played with a friends copy and remember the bitter taste of Persian arrows felling my attempt at being Alexander (but it was a great game). As well as a (Macadonian biased) campaign system it had an innovative little tactical battle system which I plan to use with my collection of DBA armies (see below, it seems to be a fore-runner of Phil Sabin's, Lost Battles in gridding the battlefield area - one definitely to play again, whereas Death and Destruction is the "monster game" addition to Proud Monster, aka Barbarossa 1941): 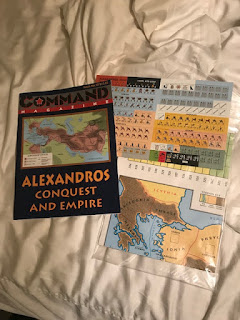 Note: Although I cannot say that I would play "all" of the Command Magazine games, there are quite a few pearls in amongst them. They were heavily criticised towards the end re: play-testing but still retained great insights into the periods they covered. I am left with one remaining "mystery" in that I have the Command Magazine and one game from Issue #44 but the Sealion game is "missing". I have the awful feeling I have put this one "somewhere safe" as part of a project - but where? The searcj parties are still out looking ;)
Posted by Geordie an Exiled FoG at 07:00

Ah, yes... somewhere safe! Our younger selves do not properly factor in the forgetfulness that accompanies advancing wisdom...

Seelowe seems to have slipped the net too!
:(

I will definitely play Alexandros though