The action at Ramillies becomes intense. The full weight of Allied infantry comes to bear on the defenders (see below, one senses no quarter is taken in this battle - particularly with the Wild Geese involved): 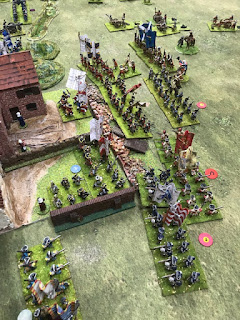 Successive rounds of combat build up infantry losses on all units. The Allies weight of numbers allows them to distribute them more evenly across many units instead of one (see below, the Wild Geese are down to their last 'base' of troops in the top section of Ramillies): 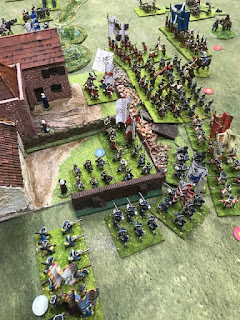 On the Allies left flank two more cavalry charges take place. At the top two French Dragoon dice versus four Allied Line Cavalry (both sides charging in). At the bottom the Allied Dragoons catch the Bavarian Cuirassiers at the halt (this seemed to be the straw that broke the French camel's back). The Allied Dragoons had turned the table of their Bavarian Cuirassier foe and the chances are now that there will be several bloody rounds of combat (see below, with this the sands of time had run out for the French Cavalry Wing): 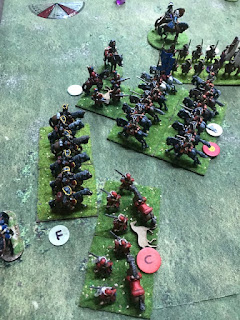 Along the river the infantry firefight had exhausted itself. The British had sacrificed a full third of  their forces but the French were unwilling (or perhaps unable) to launch any form of counterattack (see below, two forlorn bundles of fascines had been placed [next to the bridge, right-middle] at such a great price - too high a price in Corporal John's eyes): 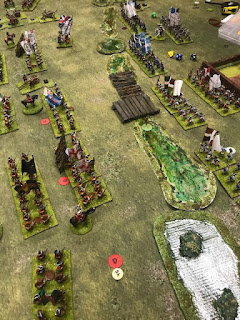 One thinks the Allied far right wing commander is almost tempting the French to charge across the bridge [to do so they have to form in condensed columns]. It looks ripe for attacking the Allies in teh flank but they would swing round to face and charge [probably] (see below, the Frenchman does not seem to be a gambler): 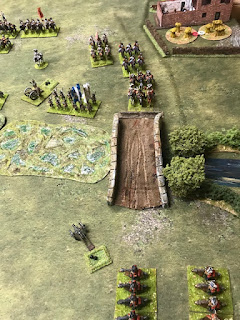 Another infantry fight, but after a protracted fire-fight the Dutch infantry charge in. At three stand to one they hold a distinct advantage (see below, there is much confusion when common colours used on both sides [one thinks of BLUE as a French colour but the Dutch used it too], you can only tell the Allied infantry by the direction of their advance): 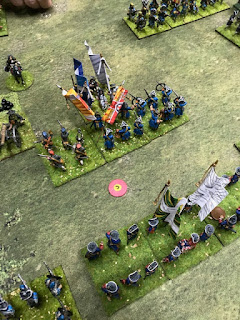 The combat ends with the French in a state of rout. Additional Allied infantry are also following up to exploit the success (see below, yet another whole appears in the French line - brick by brick the French wall is crumbling): 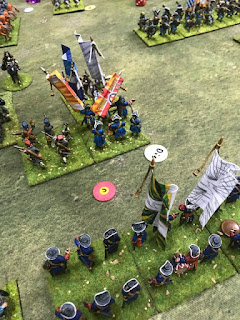 The coup 'de grace' on the Cavalry Wing. The French Dragoons put up a round of resistance before routing whereas the French Line Cavalry finds itself in a protracted hacking match (see below, the Allied cavalry have done all asked of it on this day): 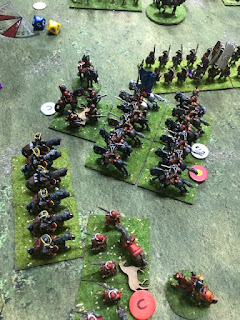 Both sides reduce themselves to below 50% casualties, this means heir combat effectiveness is now all but minimal , yet still the hacking continues (see below, the Allied Dragoons have in the course of the battle travelled the full depth of the Cavalry Wing - from the Allied baseline to the French baseline): 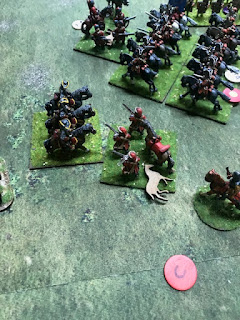 With one weary round of combat to go the Bavarian Cuirassier will be the last man standing in this combat as a hoard of Allied cavalry comes his way. Guaranteed to lose one casualty if he fights again this places this unit is a completely "no win" situation (see below, the Allied cavalry has truly earned its laurels at Ramillies): 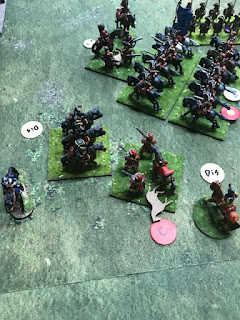 The way is now clear for an advance down the undefended French baseline, straight to the French baggage camp behind the rubble that is now Ramillies.
Posted by Geordie an Exiled FoG at 07:00