You read the set of rules, they seem straightforward (but even ten pages can contain a lot - now don't get me talking on DBA's six pages of simple rules needing seventy two pages of fan based explanation spanning several years of collaborative argumentation - over the meaning of rules after well-meaning and competition gamers get their mucky little hands on them) but until .. you get the playing pieces out on the board and start moving them around .. you don't realise the limitations of the brain's short term memory in understanding stuff. All good fun when play testing with friends though (see below, Beda Fomm set-up after what we thought was an accurate turn one - but looking at the board, flicking back to the rules and then reading the small print we realised "how wrong we were"): 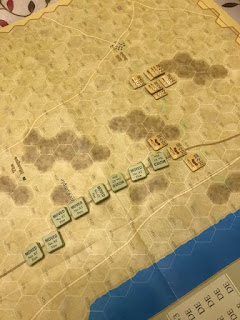 In the above you see an overuse of the "Move - No AT Fire" marker - which looked messy and we thought that cannot be right. Reading the rules again we find this isn't needed for all troops as not all troop types have AT fire capability (makes kind of sense). So particularly with respect to infantry, AT and Artillery if they do have inherent AT capability and they move they get a marker (tick). Art, AT and Regular firings are split out into different phases so this is an  fiddly but important "aide memoire" for the game (and as I sit typing I could not tell you for sure if that also applies to armour - I don't think so as it represents set-up time for guns etc but I will have to check).
Secondly stacking limits really make this a "puzzle game" (as per the comment in the video I watched), but the Italian has some crazy "battalion sized truck units" (that represent feeing Italian non-fighting admin units) that have "minimal combat value" (aka the mighty "1") and serve mainly to get in the way of Italian unit movement and be VPs for the British and Commonwealth player. As it is a battalion size it will block another battalion from moving through them on the road - but the Italian has the option of "parking by the road" (stacking value zero but an auto kill if in combat). On the game test we even read simple movement values wrong, as we saw one Italian unit had a movement value of eight which translated into thirty two road hexes (wow) .. but only as we were packing away did we discover other units had a value of six (twenty four road hexes) so the convoy would really have travelled at the speed of the slowest unit until "first contact" with the enemy. This meant that the above board is wrong and a turn one encounter is impossible which also explains why our first move looked so unhistorical (as historically British and Commonwealth infantry blocked the road while the armoured cars prowled the flank shooting up "parked" lorries - but as we were playing it, the infantry would not have time to get there).
As a design comment I can so see Frank Chadwick's interest in morale (which came through hard and fast in the later Command Decision set[s] of rules), as each formation (not counter) has its own morale tracker. Some of the Italian (mostly infantry) start really low at 6 (and as morale checks are equal to or under this value on 2d6, they are already behind the curve). Lots of combat results ask for "morale checks", lose one and you can die or retreat - and losing a morale also check means your formation "morale tracker" goes down by one and as continual combats keep asking you to pass a "morale check" - life becomes very hard vey quickly, which makes a nice vicious circle. With all these vital statistics captured on the board with small counters on tracks, it is a game that you don't want to play around cats or small inquisitive children! Nevertheless I am looking forward to the next game test when we move onto a bit of combat. I am interested to see how the game plays for the first five turns as the game quickly board fills up with Italians facing Combeforce (the RTR start arriving for the British and Commonwealth forces at the start of turn six).
Note: The goals here are to (a) play the game in full 'correctly' and (b) spot battalion+ sized vignettes on the table top in Command Decision.
Posted by Geordie an Exiled FoG at 07:00

I recently got a copy of the new version of the game (so the one you're playing), but I have played the old GDW version several times. It is definitely a hard go for the Italians. But the British don't have a lot of units to go around. It can be a puzzle for both sides.

I'm looking forward to seeing how the new version compares and what how your game goes.

Thanks, I am slogging through the play-test with my friends this week