A few weeks into 2022 and already there seems to be a steady meme or theme to my interests emerging, aka around the battles from the early Western Desert 1940-41 with the Western Desert Force taking on the Italians 10th Army. I was just thinking out loud to myself on a previous post of pushing this thought experiment forward, along the lines of perhaps revisiting the old Command Decisions rules set (aka Frank Chadwick) .. Benghazi Handicap being long out of print and circulation (but there is a Beda Fomm scenario on the Command Decision: Test of Battle website). Then out of the blue a good friend (who read the earlier blog post) sent me a special "surprise" package through the post - a very, very relevant game called Beda Fomm. This is an absolute gem, being a Consim Press 2010 republished version of a 1979 game from Frank Chadwick [yes, of my favourite Command Decision fame .. but note the year "1979", this is pre-Command Decision I publication date, but reading the game you can clearly see the influences coming through that he tool and emerged/developed into Command Decision miniature rules set]. Please see the Boardgamegeek links below for more detail (see below, and it just goes to show that a "good game" is still a "good game" no matter the "age of the game"; the difference between the two edition just seems to be more of map and counter production quality not rules):

There is some lovely evocative box art too on the new game too, along with excellent quality counters and maps inside (see below, you have got to love seeing those MK VIs tin-can light tanks looking busy as they boldly go striding across the desert): 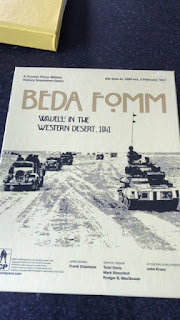 The actual game map (or battle area) is only a very small part of the Western Desert as the battle came at the very end of Operation Compass - when the Italians were in full retreat and was in effect a brilliant "closing the door" swinging movement of British armour from out the desert which sealed the fate of the Italian 10th Army once and for all in Cyrenaica (see below, the map; the plan is to play the game to see where the battles occur and then put this area of interest onto the table top under "Edition One(?)" Command Decision [CD I]): 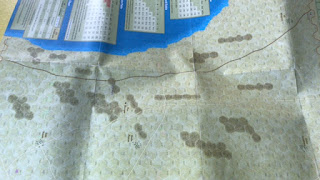 Note: All this Western Desert Force interest in 10mm means that there has been lack of painting progress on the15mm Malburians - they are "furloughed" as such for the time being, but rest assured their time will come.
Breaking News: Somebody else seems to be doing something very similar to me in 2022! Lovely terrain, some nice 6mm models and Command Decision (IV) Test of Battle, see link below:
http://ooh-shiny-complex.blogspot.com/2022/01/swanning-about-in-desert-command.html
Posted by Geordie an Exiled FoG at 18:00

This looks like a great project. I look forward to seeing how it pans out.

Have you played The Sands of War; another Chadwick design but from 1991. It feels very like CD in scale and has a bunch of scenarios that might be easily converted.