All this talk of the simulation of the battle of Beda Fomm has left me (or the collective "us") a few models short of being ale to create the British RTRs for Beda Fomm on the table top. Particularly because the A9, A10 and A13 fleets of British cruiser tanks did not have a long shelf life, particularly when they later came into contact with the Africa Korp. So A9s, A10a and A13s don't make it into the 1942+ battles, which is the popular 8th Army collection phase [for us currently]. Therefore "I had to" (or rather chose to) order some early war British kit from Pendrakon - well that was my excuse anyhow. That really meant I better start painting the three A13's I already had (see below, stunned into action I have primed in the Airfix acrylic primer grey): 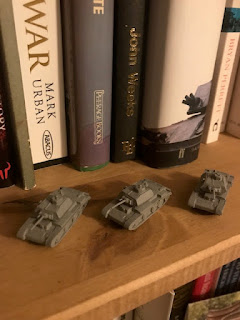 Next stop will be a Vallejo Brown Wash and a dark sand colour. I am thinking four collections of three tanks  (comprising or rather representing a squadron) would make up the armoured regiment, with a couple of the precious CS tanks (which could fire HE to take out AT Guns and fire smoke) in the HQ Troop. That should be enough for Beda Fomm as the cruiser formations were understrength by that point in the campaign anyhow.
Posted by Geordie an Exiled FoG at 07:00