Ancient Naval Rules circa Salamis .. "Bring out your triremes"

Drawn by a long, long term interest in replaying the Battle of Salamis and a fifteen year unfinished project of wargaming "The Greeks in Peril" DBA 15mm campaign (including the naval side of things) I gathered my things "old and new" to hand regarding ancient naval (see below, something old, something new, something borrowed something blue): 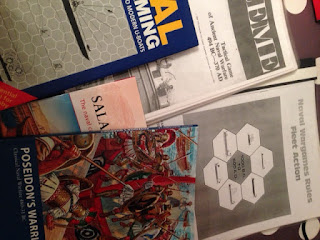 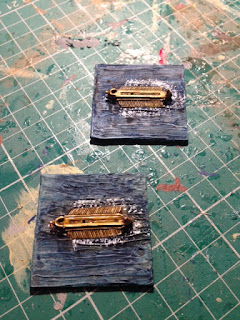 They do look cute if I do say so myself and then being happy I started to "border on madness" when I decided to 'dot the whites of their eyes' and give them a traditional "Greek Eye" (see below, you may have to 'click on the picture for a close-up look to even see it .. albeit rather blurred): 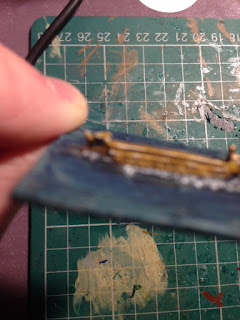 Cannot see it it? Neither can I, let's try another go (see below, er perfectly visible from six foot away .. why am I bothering, I guess because "It is there!"): 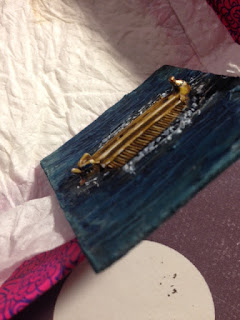 The "painting tray" is currently filled up with my "first fleet" (see below, note I have moved onto "circular disks" as they are (a) more practical .. they fit onto small hexagon battle sheets better and (b) less "sea-scaping" required .. something that always drives me bonkers .. aka I never think I am doing it right): 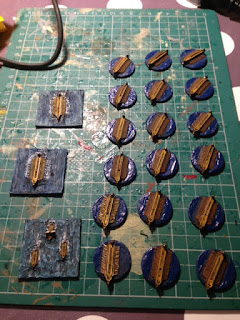 At least "these" (see above) should provide a means of testing out the rules mentioned above ('when finished' so don't lose that momentum). I know there are alternatives larger (1/300 and 1/3600), smaller [representing squadrons better] and some rather more expensive (see below, Outpost Wargames Services, http://www.outpostwargameservices.co.uk/ from their 1/3600 range, which I like but I seemed to be doing more "sea" than boat and these may suit David Manley's rules better): 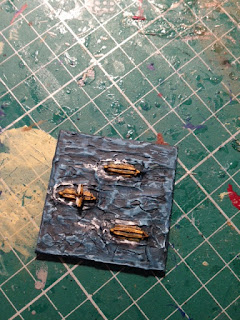 Watch this space in 2017 lovers of Greek rowers and trireme rams ;)

Extra bit: Inspiration found on the web http://wabcorner.blogspot.co.uk/search/label/Galleys%2FLongships%2FWatercraft
Posted by Geordie an Exiled FoG at 07:00